At least 18 people were killed and 20 others were injured in twin suicide car bomb blasts, followed by continuous gunfire here on Friday.

“As far as we know, there has been one blast beside the presidential palace, and another close to a popular hotel,” Major Mohamed Ahmed, a police officer, told local media.

The Aamin Ambulance service confirmed the death toll and shifted the injured to the nearest hospital, Al-Jazeera reported.

The twin car bomb blasts comes a day after the Somali government had issued a “possible terror warning” in Mogadishu.

The militant group al-Shabaab claimed responsibility for the attack.

The group frequently carries out suicide attacks in Somalia and parts of East Africa.

In December last year, 18 police officers were killed when an al-Shabab fighter blew himself up inside the country’s main police academy in Mogadishu.

Furthermore, the Mogadishu bombings on October 14 and 28 last year claimed more than 350 lives and injured over 400.

Somalia has been plagued with insecurity, violence and political chaos in the last three decades. Infighting between the forces of the Federal Government of Somalia, assisted by African Union peacekeeping troops, and various militant Islamist groups and factions, have claimed thousands of lives. 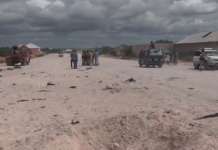