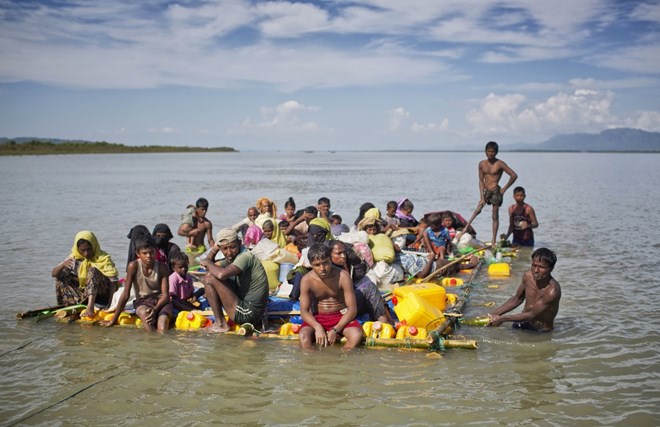 FILE- In this Nov. 11, 2017 file photo, Rohingya Muslims travel on a raft made with plastic containers on which they crossed over the Naf river from Myanmar into Bangladesh, near Shah Porir Dwip, Bangladesh. Six months after waves of attacks emptied Rohingya villages in Myanmar, sending 700,000 people fleeing into Bangladesh, there are few signs anyone is going home soon. Life isn’t easy in the refugee camps, but the Rohingya living there have one immense consolation. “Nobody is coming to kill us, that’s for sure,” says one man. (AP Photo/A.M. Ahad, File)

DHAKA, Bangladesh (AP) — Their houses are often made of plastic sheets. Much of their food comes from aid agencies. Jobs are few, and there is painfully little to do. The nightmares are relentless.

But six months after their horrors began, the Rohingya Muslims who fled army attacks in Myanmar for refuge in Bangladesh feel one immense consolation.

“Nobody is coming to kill us, that’s for sure,” said Mohammed Amanullah, whose village was destroyed last year just before he left for Bangladesh with his wife and three children. They now live in the Kutupalong refugee camp outside the coastal city of Cox’s Bazar. “We have peace here.”

On Aug. 25, Rohingya insurgents attacked several security posts in Myanmar, killing at least 14 people. Within hours, waves of revenge attacks broke out, with the military and Buddhist mobs marauding through Rohingya villages in bloody pogroms, killing thousands, raping women and girls, and burning houses and whole villages. The aid group Doctors Without Borders has estimated at least 6,700 Rohingya were killed in Myanmar in the first month of the violence, including at least 730 children younger than 5. The survivors flooded into Bangladesh.

Myanmar and Bangladesh have signed an agreement to gradually repatriate Rohingya in “safety, security and dignity,” but the process has been opaque and the dangers remain. New satellite images have shown empty villages and hamlets leveled, erasing evidence of the Rohingyas’ former lives. And with 700,000 having fled Myanmar since August, more Rohingya continue to flee.

So for now, the refugees wait.

“If they agree to send us back that’s fine, but is it that easy?” asked Amanullah. “Myanmar must give us citizenship. That is our home. Without citizenship they will torture us again. They will kill us again.”

He said he would only return under the protection of U.N. peacekeepers: “They must take care of us there. Otherwise it will not work. ”

Buddhist-majority Myanmar doesn’t recognize the Rohingya as an official ethnic group and they face intense discrimination and persecution.

The children in the camps face a particularly difficult time. The U.N. estimates children are the heads of 5,600 refugee families.

A survey of children’s lives inside the camps showed they faced an array of terrors, from girls reporting concerns of harassments near the camp toilets to fears that elephants and snakes could attack them as they collect firewood.

“We cannot expect Rohingya children to overcome the traumatic experiences they’ve suffered when exposed to further insecurity and fears of violence in the camps,” Mark Pierce, country director for Save the Children in Bangladesh, said in a statement.

The study was prepared jointly by Save the Children, World Vision and Plan International.

“The overwhelming message from these children is that they are afraid,” Pierce said. “This is no way for a child to live.”