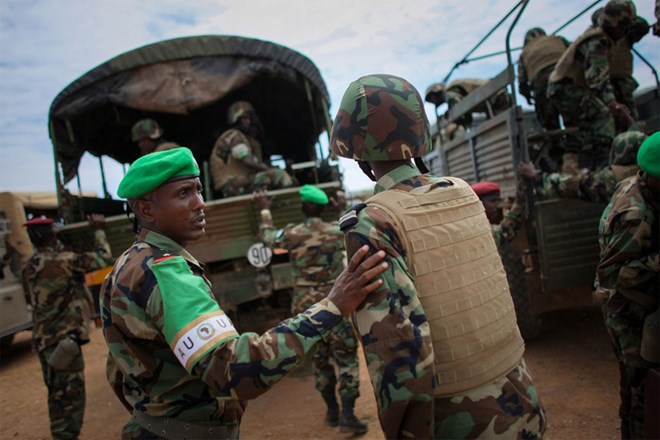 MOGADISHU, Feb. 23 (Xinhua) — African Union troops are still needed in Somalia until 2021 to help flush out Al-Shabaab militants and speed up stabilization, an AU envoy has said.

Francisco Madeira, Special Representative of the Chairperson of the AU Commission (SRCC) for Somalia, said Somali security forces are not yet adequately capacitated to take over national security.

“Given the level of the threat and the status of the political process, the option of ending the surge in uniformed personnel before 2021 could bring about a serious risk of reversals that could derail the gains already made,” Madeira said.

The AU envoy was speaking late Thursday during a roundtable discussion on the achievements and challenges facing the 11-year-old African Union Mission in Somalia (AMISOM).

In a statement released on Friday, Madeira urged the Somali public to rally behind the AU mission and the government to speed up the stabilization process and restore lasting peace and security in the country.

He said although the drawdown of AMISOM troops entails the handover of some Forward Operating Bases to the Somalia National Army (SNA), the local army must be fully capable of taking charge of these bases, otherwise Al-Shabaab will take them.

AMISOM is currently implementing the UN Security Council resolution passed in August 2017 that authorized a reduction of troops and transfer of national security responsibilities to the Somali National Security Forces.

Madeira said AMISOM will continue working closely with the federal and state governments during the transition period.

“We all agree that we must decisively address the threat posed by Al-Shabaab, otherwise they will continue to pose grave danger, not just to Somalia and the region, but to the entire continent,” Madeira said.

He also defended AMISOM from accusations of inactivity, saying its presence in Somalia had ushered in a period of stability and put the country on the path to one-person one-vote in 2021.

Madeira told the roundtable that the AU had formed a group of special envoys to mobilize development partners to support AMISOM and Somalia with predictable funding to enable them to effectively fight Al-Shabaab.