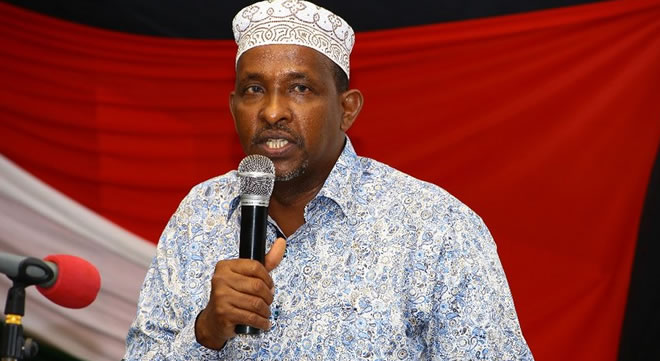 The court dismissed Farah Maalim petition and directed him to pay Sh6 million in costs.

Justice Hedwig On’gudi ruled that there were no irregularities or malpractice that can annul the election.

During the hearing, he told the presiding judge that elections in the entire constituency was not free and fair.

He said voters were bribed to vote in a certain way thus favouring certain candidates though he admitted he had no evidence to back his claims.

“I did not see the bribery or anyone being bribed,but I saw a crowd negotiating,” he told court during his submissions on the petition filed after he rejected results of the August 8 general election.

Maalim also said he did not file a complaint.

But he maintained that there was improper relay and transmission of results which affected the polls.

On his part, Duale maintained that he beat Maalim fairly in the August 8 election.

While defending his win, the leader of majority said the votes he got against his rival were far more than what he garnered in 2013, which he attributed to his development record in Garissa Town.

“It is the petitioner who, in fact, provided a list from his clan to be considered for presiding officer positions,” he told court during the hearing.

He said claims that there was irregularities committed during the election cannot be substantiated.

The Majority Leader said Maalim made massive allegations of anomalies but failed to back them with evidence.

Speaking after the ruling, Duale said the decision showed the level of confidence that the Garissa residents have in his leadership.