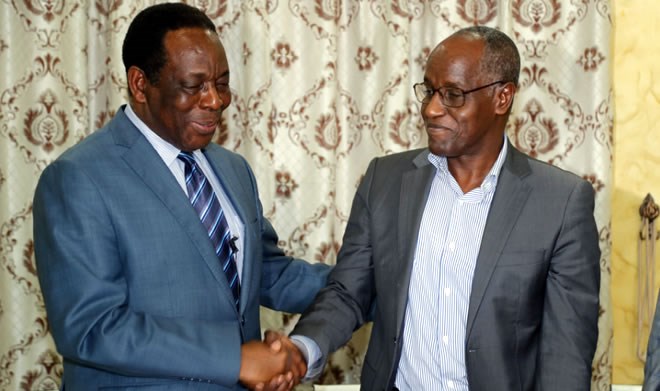 Troops from Ugandan contingent have on 23rd this month tried force their way through a checkpoint manned by Somali security forces, leading the two sides to engage a brief gun battle.

The shootout between the forces at NISA checpoint near Km4 claimed the lives of a Somali soldier and injured four others.

Officials from Somali government and AMISOM commanders on Tuesday held talks over the clashes.

Somali minister for interior, Abdi Mohamed Sabriye who attended the meeting said the sides agreed to form an investigative committee to probe the incident.

“In fact, that incident happened accidently. When we came to know about the circumstances of the unplanned issue between the two troops, we agreed as the Somali government and AMISOM to remedy that matter, to investigate it fully and have a decision based on the outcome of the investigations,” Sabriye said.

Sabriye pointed out that both officials from Somali government and AMISOM expressed concern over the friendly-shoutout.

Francisco Madeira, African Union Special Envoy to Somalia who also spoke at the meeting has disputed with number of the people killed in the skirmishes saying AMISOM regreted over the incident where its troops killed only one NISA soldier and injured  four others including two civilians.

“We are going to investigate and find a solution that does not interfere with our desire, our determination to move togather in the common purpose,” Madeira noted.

The outcome of meeting contradicts the reponse from Uganda whose soldiers were involved in the clashes.