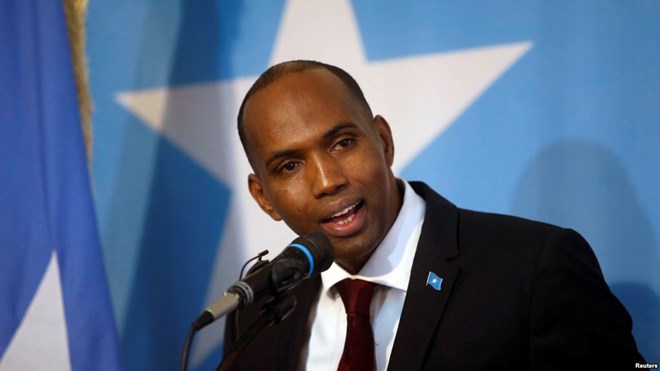 Friday’s attacks were the first by Al-Shabab in the capital since October when a truck bomb killed more than 500, and an attack on a hotel two weeks later claimed the lives of at another 30 people.

“Security is the utmost priority,” Khaire said. “We will not tolerate the killing of our people. We will not be demoralized by one or two explosions. It’s important you end insecurity in Mogadishu.”

Last year, the government formed the Mogadishu Security and Stabilization Forces, who were instructed to raid homes suspected of being hiding places for militants and to erect checkpoints without warning.

But the effort had several setbacks, including the deadly truck bombing and the firing of two security chiefs in the aftermath of the bombing. There were also incidents where security forces working with the stabilization force clashed after mistaking each other for Al-Shabab.

Khaire warned the security forces to avoid such mistakes. “You must avoid every step that could lead to internal fights between yourselves,” he said. “We do not have any more time for an enemy among us who is dressed to take the lives of Somali people. You must be watchful every night.”

In another setback, African Union Mission in Somalia peacekeepers were involved in a shooting that led to the death of at least one Somali soldier Friday evening. Six other people were wounded, including two soldiers and a senior legal adviser to the Somali justice ministry.

The shooting happened after an AU military convoy approached a checkpoint near the airport that was manned by Somali troops. But Somali forces on orders to check all vehicles entering the airport stopped the convoy, according to an incident report. An argument ensued, and shooting erupted.

Dahir Amin Jesow, a member of the Somali parliamentary committee on security and internal affairs, discussed the issue on Sunday. He told VOA Somali that AMISOM troops fired on Somali forces. He said the Somali forces were expected to stop vehicles approaching the airport, including AMISOM, because of the security lockdown.

“We suspect that Al-Shabab is capable of obtaining vehicles similar to AMISOM’s, which they may have seized during attacks on peacekeepers, like the attack in El-Adde,” Jesow said. “Therefore, it was a matter of caution by the Somali troops to stop them since the convoy was headed for the airport.”

AMISOM officials could not be reached for comment. In a press release, Ambassador Francisco Caetano Madeira, head of AMISOM, confirmed that the peacekeepers were involved in an incident at the checkpoint. He said the troops involved in the incident were transporting civilians injured in the Al-Shabab attack to an AMISOM hospital.

Madeira said the incident was now under investigation by the Somali government and AMISOM.

Officials say Somali troops and AU forces will have to improve security in Mogadishu if they are to earn the support of the public who doubt the two groups can stop Al-Shabab attacks.

Khaire echoed the need to win public support and has urged the soldiers to show compassion.

“When you enter their homes, be courteous,” he said. “When you speak to them in the streets, show good conduct and discipline. Don’t be kind to the enemy, but be compassionate to the people.”

The new commander of the police, Gen. Bashir Abdi Mohamed, told Khaire that new operations started effective Sunday night. He said operations will be carried out every night.