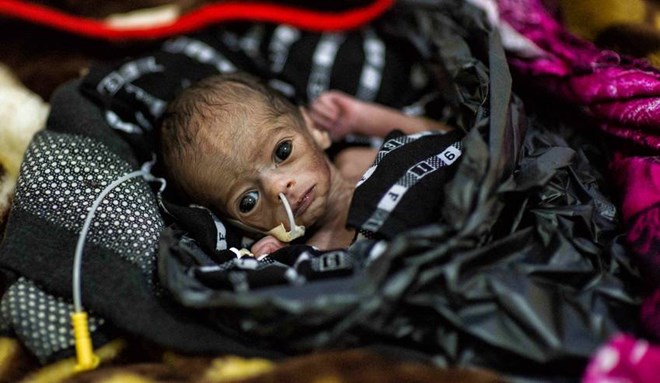 Faadumo Mohamed Ahmed, 15 days old, was born prematurely. Her teenage mother died from complications while giving birth to her. She is being cared of by her mother’s sister and other relatives. Bosaso General Hospital, Bosaso, Puntland state, Somalia. © UNICEF Somalia/2016/Sebastian Rich

Nairobi (HMC) – A United Nations Children’s Fund (UNICEF) report released on Tuesday has named Somalia one of the riskiest places to be born. According to UNICEF, Somalia is in a four-way tie for the fourth most dangerous country to be a newborn.

1 in 26 babies from Somalia, Lesotho, Guinea-Bissau and South Sudan die before celebrating their first birthday.

The report, entitled ‘Every Child Alive: The urgent need to end newborn deaths’ concluded that global deaths of newborn babies remain alarmingly high among the world’s poorest and most conflict-wracked countries.

“While we have more than halved the number of deaths among children under the age of five in the last quarter century, we have not made similar progress in ending deaths among children less than one month old,” said Henrietta H. Fore, UNICEF’s Executive Director. “Given that the majority of these deaths are preventable, clearly, we are failing the world’s poorest babies.”

The report stated that almost half of all children under-five who died in 2016 were newborns.

More than 80 percent of the newborn deaths are due to prematurity, complications during birth, or infections. These deaths can easily be prevented with access to healthcare professionals along with proven solutions like clean water, disinfectants, breastfeeding within the first hour, skin-to-skin contact and good nutrition.