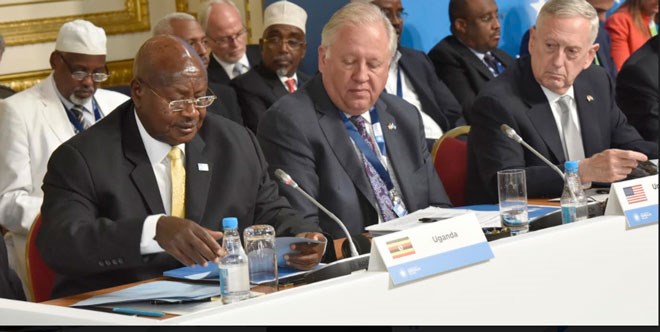 FILE PHOTO: President Museveni gives his Somalia prescription as US Defence Secretary Mattis looks on right at the London conference in 2017. He hosts AMISOM leaders this week

KAMPALA – Uganda’s President Yoweri Museveni will on March 2 convene a Summit of Troop Contributing Countries (TCCs) of the African Union Mission in Somalia (AMISOM) in Kampala. Leaders from the AMISOM contributing countries and and the Federal Republic of Somalia are expected to participate at the highest level.

The Summit is being convened within the framework of conclusions of a September 2017 meeting hosted in New York by President Museveni on the margins of the United Nations General Assembly.

The New York Summit was called to exchange views on the situation in Somalia and the future of AMISOM following the adoption of the UN Security Council Resolution 2372 (2017), whose main thrust was the phased reduction and draw-down of AMISOM troops; and the gradual handover of security responsibilities to Somali National Security Forces(SNSF).

The March 2nd Summit in Kampala, will therefore provide an opportunity to further discuss the current situation in Somalia. Focus will be on the continued role of the TCCs/AMISOM in Somalia, a mechanism for sustainable and predictable funding for AMISOM plus inputs to the AMISOM transition plan.

The Summit and will be preceded by a Meeting of Experts and Senior Officials on Tuesday March 27, a meeting of Chiefs of Defense Forces on Wednesday , a Meeting of Ministers of Foreign Affairs and Defence on March 1, 2018 . There will also be a Meeting between TCCs and Partners on the same day.

Uganda was the first country to deploy troops under AMISOM into Somalia in March 2007. So far, Uganda has provided six AMISOM Force Commanders. Uganda’s Lt Gen Jim Owoyesigire is the current commander.

The Ugandan contingent remains the largest contingent in AMISOM with over 6,000 troops based in Sector 1 which comprises of Banadir (Mogadishu), Middle and Lower Shabelle regions.