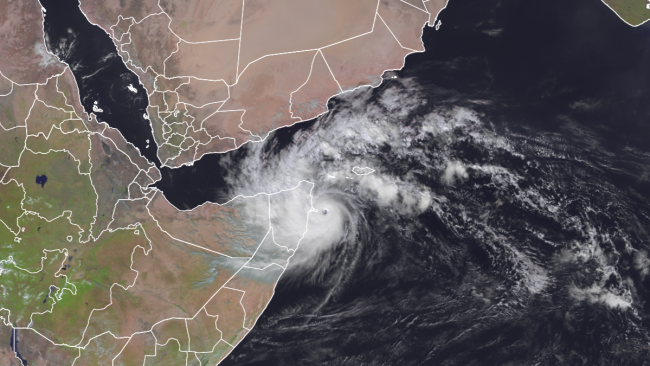 MOGADISHU, Nov. 24 (Xinhua) — Tropical cyclone Gati which made landfall in Somalia on Sunday evening, killing eight people and caused destruction, has weakened and is moving towards the Gulf of Aden, the UN humanitarian agency said on Tuesday.

The UN Office for the Coordination of Humanitarian Affairs (OCHA) said however that heavy rains have triggered flash floods in Puntland’s Bari region, especially in the coastal and inland areas.

The UN agency which cited administration in Bari said an estimated 27,000 people have been displaced in Bossaso town, bringing the total number of displaced people in Bari to about 42,000.

“Further reports indicate that more than 3,800 shelters were destroyed or damaged, while 4,500 families have reportedly lost livelihoods and income following damage to businesses and infrastructure in the town and surrounding areas,” it said in its Update on the storm.

The UN agency said flash floods and strong winds have also killed an unknown number of livestock especially in Bossaso which is famous for its ports from where livestock are exported to markets in the Gulf countries. Victoria councillor who travelled to Africa amid pandemic apologizes to council

Victoria councillor who travelled to Africa amid pandemic apologizes to council