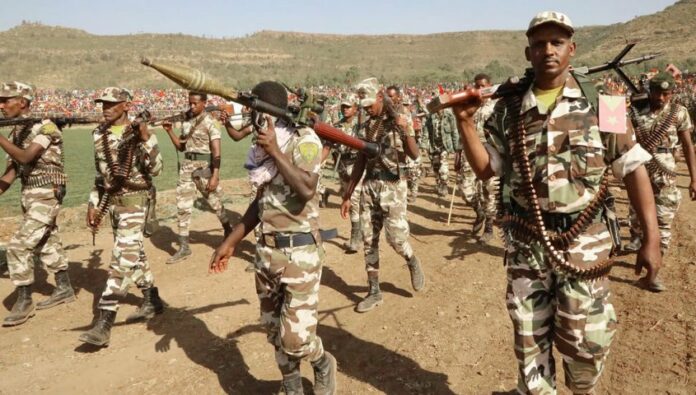 The rulers of Ethiopia’s rebellious Tigray region refused on Wednesday to surrender to federal troops and instead claimed they were winning a war that has exacerbated ethnic fractures in the vast nation and further destabilized the Horn of Africa.

“Tigray is now a hell to its enemies,” they said in a statement on the two-week offensive against them.

“The people of Tigray will never kneel.”

The war has killed hundreds and possibly thousands on both sides, sent 30,000 refugees fleeing into Sudan, and called into question the reputation of Africa’s youngest leader who won a Nobel Peace Prize in 2019 for a peace pact with Eritrea.

Abiy, 44, ordered air strikes and sent soldiers into Tigray on Nov. 4 after accusing the well-armed local ruling party, the Tigray People’s Liberation Front (TPLF), of revolt and an attack on a government base.
The TPLF says their former military comrade and one-time political partner has been persecuting their ethnic group and removing Tigrayan officials from senior security and government positions since he took office in 2018.

In a lengthy statement, the Tigrayan leaders accused federal forces of targeting civilians, churches and homes, while blocking internet, electricity and banking services. Hundreds of thousands of people have been uprooted from homes, it said.

Nevertheless, Tigrayan forces had captured tanks and artillery and would soon drive their enemies out despite being massively outnumbered, it added.

The government denies it is targeting civilians.

The northern state is largely cut off to the world as media are barred, most communications are down and foreign aid workers are pulling out, meaning Reuters could not independently verify assertions made by either side.

“The wider world will soon testify the amazing victories achieved by the people and government of Tigray,” the Tigrayan statement added. “Attempting to rule the people of Tigray by force is like walking on a burning flame … Tigray will be the graveyard of dictators and aggressors and not their playground.”

Tigrayans who have fled to Sudan have told Reuters that militias from Amhara, the neighbouring state, attacked them because of their ethnicity and that government airstrikes were killing civilians. There have also been reports of Tigrayans losing jobs and facing discrimination around Ethiopia.

But Abiy’s government has repeatedly denied an ethnic undertone, saying it is simply restoring law and order, pursuing criminals and guaranteeing national unity.

“The federal government… denounces, in the strongest of terms, mischaracterization that this operation has an ethnic or other bias,” its task force on the crisis said on Wednesday.

Aiby is of mixed heritage, with parents from the Oromo and Amharic ethnic groups – the country’s largest and second largest groups respectively.

Tigrayans represent about 5% of Africa’s second most populous country. They dominated national leadership between 1991 and 2018, before Abiy took the premiership and began opening up both the economy and a repressive political system.

The government says rebel forces have destroyed bridges and a road connecting the regional capital Mekelle.

Debretsion Gebremichael, elected Tigrayan president in polls that Ethiopia does not recognise, told Reuters in a text message his forces had fallen back but denied they destroyed bridges.
“We have shifted our defence line and as a result they get into some towns of South Tigray,” he added.

Ethiopia’s army is one of the strongest in Africa, but many senior officers were Tigrayan and plenty of its heavy weaponry were based in Tigray, which was on the front line of the two-decade standoff with Eritrea after a 1998-2000 war.