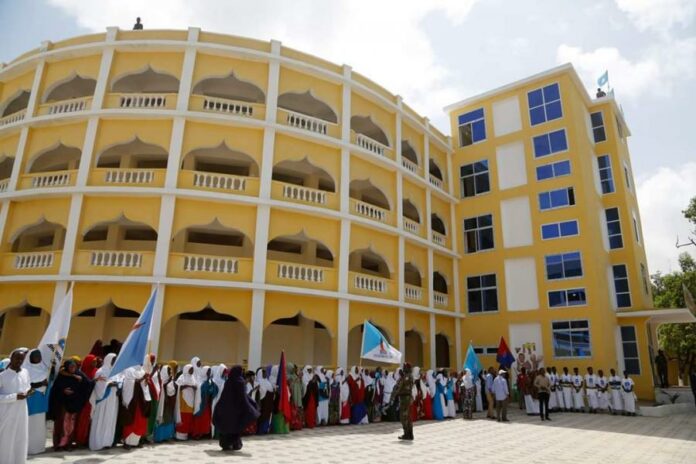 The workshop, which is part of an ongoing project for revival of the Somali National Museum, funded by the UNESCO Heritage Emergency Fund (HEF), was hybrid in form with physical participation of museum stakeholders at SOMASA in Mogadishu and online participation by international experts in museum and collections management as well as representatives of UNESCO and other UN agencies in Somalia.

Following the reopening of Somalia National Museum on July 1, UNESCO partnered with the Somali Academy of Science and Arts (SOMASA), in collaboration with the Somali National Commission for UNESCO and the Permanent Delegation of Somalia to UNESCO to organize a capacity building workshop on 25th November 2020 that aimed to strengthen the management and administration of the National Museum.

The National Museum of Somalia was founded in 1933, however, during 30 years of armed conflict, its building was badly damaged, the national collections were looted, and its staff dispersed. Although the museum building was fully rehabilitated from 2019 to 2020, there is an urgent need to establish critical management and administrative structures for the museum and its future collections.

The workshop, which is part of an ongoing project for the revival of the Somali National Museum, funded by the UNESCO Heritage Emergency Fund (HEF), was hybrid in the form with physical participation of museum stakeholders at SOMASA in Mogadishu and online participation by international experts in museum and collections management as well as representatives of UNESCO and other UN agencies in Somalia.

Jocelyn Mason, United Nations Development Programme Resident Representative for Somalia, gave the opening remarks at the workshop. He highlighted the potential role of the National Museum in contributing towards the UN Sustainable Development Goals and the African Union’s Agenda 2063: the Africa We Want as well as the Somali National Plan for Development.

“There are many countries around the world who have understood the soft power of museums and who have invested in bringing out their potential for the development of the creative economy, for contributing to lifelong learning through both formal and informal education, and for serving as a safe space for intercultural dialogue and exchange. I am pleased to see that Somalia is among those countries sharing this vision for museums.” Said Jocelyn Mason, Resident Representative, United Nations Development Programme for Somalia

Following an introduction to the priorities and goals for the National Museum by the Director of the Somalia National Museum, Ahmed Said, the Programme Specialist for Culture at UNESCO’s Regional Office for Eastern Africa, Karalyn Monteil, provided an introduction to the UNESCO 2015 Recommendation concerning the Protection and Promotion of Museums and Collections, their Diversity and their Role in Society.

International experts, Catherine C. Cole and Prof. George Abungu led interactive sessions on: international standards in the management of museums and collections; guidance on the role of museums in local communities, in peacebuilding and in sustainable development; recommendations for the National Museum Vision, Mission Statement, and Goals; as well as museum organizational structures, staff qualifications and the International Council of Museum’s Code of Ethics.

Participants discussed the need to identify Somali collections in museums and galleries around the world and to request repatriation and restitution of Somali cultural heritage. They welcomed suggestions for educational outreach and programming for peacebuilding and reconciliation and sought more examples on how to draw youth into the museum and ensure the transmission of cultural heritage through Somali elders.

In his closing remarks, H.E. Abdullahi Abukar Haji Abdullahi, Somali Minister of Education, Culture and Higher Education, thanked the UNESCO Heritage Emergency Fund, SOMASA, and key stakeholders for their support, and expressed his wishes for repatriation of Somali museum collections and active development of the National Museum.

Following the workshop, the national and international experts will work together to finalize the mission statement, vision, and goals for the National Museum. UNESCO and the Government of Somalia will continue to seek international support for the development of the National Museum and its collections through capacity building, legislation and policy support, and partnerships