Mogadishu, 23 February 2021 – Somalia’s international partners* call on all signatories of the 17 September agreement to come together urgently to finalize implementation of the electoral model, building on the work of the Technical Committee which met in Baidoa on 15-16 February.

Federal and Member State leaders should also maintain open lines of communication with other Somali political leaders and civil society to ensure the elections have the broadest possible support and electoral bodies act with independence from political interests.

International partners are concerned over the violent events which occurred in Mogadishu on 19 February. We call on all parties to maintain calm and exercise restraint to allow political dialogue to advance.

It is now more urgent than ever for Somalia’s political leaders to place the national interest first, and work together to hold elections that are broadly supported as soon as possible to move the country forward. International partners are actively supporting Somalis to achieve this outcome. 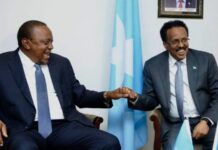 Bus driver who beat his wife to death in their Enfield...