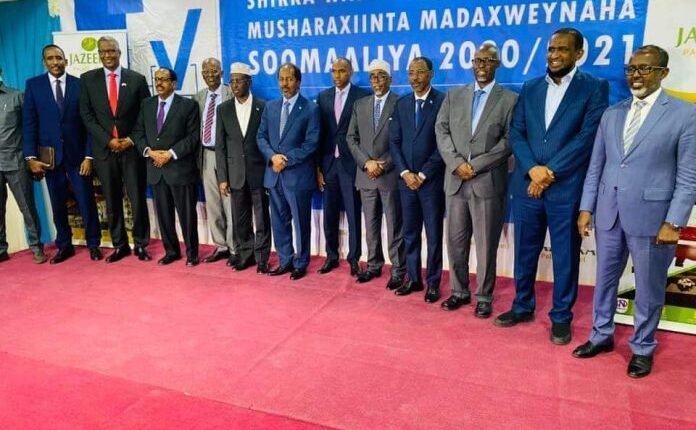 MOGADISHU (HMC) – President Mohamed Farmaajo must hand over power to a Transitional Council, the opposition in Somalia has said, reiterating its earlier demands and added that the heads of police, military and intelligence step down.

The Council of Presidential Candidates (CPC) which comprises 15 presidential candidates said in a statement Wednesday the recent violence in Mogadishu which it blamed on the government forces and the lapse of the term of the president necessitates additional provisions to the September 17, 2020, political agreement.

Dubbed ‘The 17 September Agreement Plus’, the CPC proposes a raft of measures echoing similar ones raised by Puntland.

The CPC demands an independent investigation into the alleged attacks on former presidents Hassan Sheikh Mohamud and Sharif Sheikh Ahmed in their hotel on February 19 and the firing of live bullets on opposition protestors the following day in Mogadishu.

Puntland has set out these three demands in its latest position on the ongoing political stalemate.

Additionally, the CPC proposes that the police, except the Harma’ad unit and AMISOM, take charge of the security elections which must be conducted within 60 days.

The UN and other western missions have warned against ‘a parallel process’ from the September 17 model agreed to by Farmajo and Federal Member States presidents.

Meanwhile, the opposition leaders are expected to meet with prime minister Mohamed Roble today in Mogadishu to deliberate on the stalled talks.

The opposition has called for fresh protests in Mogadishu for Friday (February 25).