BALETWEYNE  (HMC) – Somalia’s government has appointed a new Governor for Hiiraan region Sunday, replacing the former regional governor who was flown to Somalia’s capital for a criminal inquiry related to the killing of a UN employee last month.

According to officials, Yusuf Ahmed Hagar (Dabageed) who served as the region’s governor from 2006-2009 was reappointed for the same position, replacing Abdifatah Hassan Afrah who served as a governor since 2012.

Mr. Hagar’s previous administration was deposed by the Islamic Courts Union who control large parts of south and central Somalia before Ethiopian troops who invaded in Somalia late 2006 had overthrown them.

Mohamed Ibrahim Abdullahi, the region’s deputy commissioner confirmed the appointment of the new governor for HMC by phone from Beledweyne, the regional capital of Hiran region.

Mr. Hagar’s appointment is seen as an attempt aimed at unravelling the tense situation in the region which has seen protests and clashes between security forces and clan militias as the result of the UN’s staffer’s killing.

The development has raised fears of tribal fighting divisions in the region which has long enjoyed diverse clans’ peaceful co-existence and administrational power sharing. 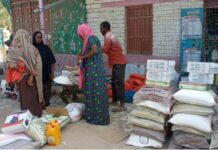