The Chief of Defence Forces, Gen Edward Katumba Wamala has said the Ugandan troops serving under the African Union Mission in Somalia will be paid in Euros effective January 2017 and that ten months arrear for the troops has been transferred to Bank of Uganda.

“We have received Information that African Union has transferred to Bank of Uganda over US $ 4.9million, being arrears payment for our troops serving in Somalia to cover the period of January to September 2016.” Gen Wamala said, adding that the European Union that pays the allowances of the troops has resolved to pay in Euros effective January 2017.

He revealed this yesterday at UPDF’s Peace Support Operation Training Center in Nakaseke District, while officiating at a flagging off ceremony of 2745 troops under Uganda Battle Group 20 (UGABAG XX) who will early next week deploy to Somalia to replace UGABAG 17 that has completed its one year tour of duty in Somalia.

Gen Wamala said the delays in the payment was beyond the Uganda Government control.

“There were delays because we got into serious discussions with the EU when they resolved to reduce the monthly allowances of the troops from US $ 1028 to US $ 828. They then later resolved to pay in Euros which caused other discussions and signing of fresh Memorandum of understanding,” he said.

He refuted recent media reports claiming that UPDF troops were planning to mutiny over the delayed AMISOM allowances.

“UPDF is not a mercenary forces. We did not go to Somalia for money but rather a just pan African cause. The issue of allowances came later as a by-the-way. We have served in Central Africa and South Sudan without any pay and so the force can never mutiny over allowances or anything else. UPDF is a professional force,” he explained.

He further explained that under the new pay arrangement, the troops in Somalia will receive an equivalent of the US $ 828 but in Euros. Because Parliament resolved that UPDF will deploy to Somalia on Zero Funding from Uganda, the government will deduct an equivalent of US $100 (EUR 92) for administrative costs like transporting the troops for compassionate leave and acquiring extra uniforms.

“This means every soldier will now receive a monthly take home of EUR 646 as allowances for serving under AMISOM,” Gen Wamala said.

Mr. Wamala gave the troops a lengthy financial literacy teachings stressing the importance of saving for the future, especially for retirement. He advised them against leaving their ATM cards with relatives saying such would be a fertile ground for family feud.

He warned the troops that despite the security improvements in Somalia, the mission is still a “dose and die mission” and that they need to remain alert all the time. The CDF revealed that amongst the three battalions under UGABAG 20, two battalions, 7Bn and 69Bn, had earlier served in Somalia. He said he expects they will perform better due to the experience they already had in the Somalia operations.

UPDF troops will be going with a new Contingent Commander, Brig Kayanja Muhanga, who is replacing Brig Sam Okiding upon the successful completion of his one year tour of duty in the mission.

Previously, Kayanja ALSO served as the Commander of UGABAG 8 that participated in pushing Al shabaab out of Mogadishu and later captured Afgoye in lower shabelle region.

“UPDF is committed to its contribution in the pacification of Somalia.” said a statement from UPDS

The development comes after the Ugandan army earlier warned that delaying soldiers salaries affects their morale and undermines the essence of the mission which puts civilians lives at stake. 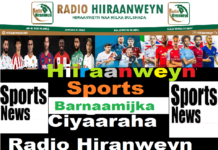