Isaac Boro and Mohamed Ali Abshir deserted their posts and turned themselves into officials late Tuesday evening. Police say that the pair and communicated their wishes to leave Al-Shabaab before making the defection.

Issac Boro said that he was treated well by police as promised and urged other Al-Shabaab fighters to put down their weapons and join the government.

Hassan Hussein Mohamed who is the disarmament rehabilitation Minister for Southwest state and the Bay Regional Police chief confirmed the defection with reporters at a press conference on Tuesday.

The former Al Shabaab commanders were working with the militant group’s police wing.

Bay region Police chief, Mahad Abdirahman Aden, welcomed the fighters decision to leave the militant insurgency group and hoped it would inspire others to come forward and leave the terror group.

Mr. Aden told reporters that one of the fighters defected Saakow in the southern Middle Juba region, the other was stationed in near Baidoa. The pair came with their Al-Shabaab issued weapons, military fatigues, and equipment.

Newly elected President Mohamed Abdullahi Farmajo has vowed to strengthen the national security forces in a bid to take the fight to Al Shabaab militants who rule over the vast swathes of land in the country’s interior. 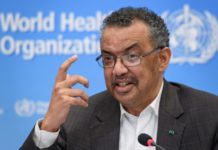