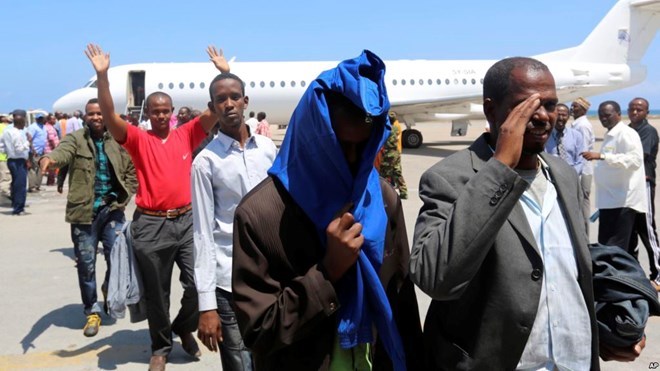 Five Kenyans are among 72 people deported from the US over immigration issues.

The rest are Somalis. Police and immigration officials said a private plane carrying the 72 individuals landed at the Jomo Kenyatta International Airport Friday morning after a long journey that started from several US states.

“They were deported over immigration issues including lacking papers. We had been informed of their planned arrival.

The Somalis will proceed to Mogadishu while Kenyans will be processed here accordingly,” said an informed official who asked not to be named.

The number of those expected was 88 who included seven Kenyans but only 72 arrived, an official said. The deportations had been anticipated given ongoing operations in the USA targeting illegal immigrants. This is the second batch of immigrants to be deported from the US in five months
In January, 2017 two Kenyans and 90 Somalis were deported from the US over immigration reasons. The group arrived at the Jomo Kenyatta International Airport, Nairobi and was processed by immigration officials.

The number was higher than in past cases confirming fears American authorities were cracking down on illegal immigrants there.

The January deportations came ahead of President Donald Trump’s signing of executive orders that included a temporary ban on most refugees and a suspension of visas for citizens of Syria and six other nations. Another order was to block visas being issued to anyone from Syria, Iraq, Iran, Libya, Somalia, Sudan and Yemen. But the order was suspended by local courts. Fresh attempts to reintroduce it have been thwarted by courts. US officials have been carrying out operations targeting illegal immigrants blamed for among others crime.