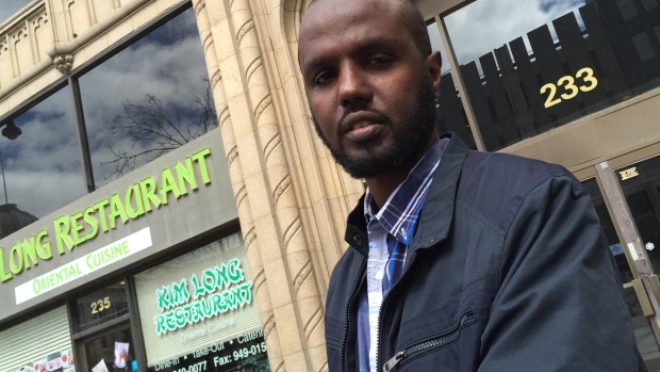 Ahmed Aden Ali, 37, denies he assaulted a CBSA officer at the Emerson, Man., border crossing on April 8 and hopes Canada will give him another chance to stay here. (Karen Pauls, CBC News)

A Somali asylum seeker charged with assaulting a border guard in Emerson, Man., is pleading his case to stay in Canada.“I hope they give me a chance to prove myself that I’ve changed,” 37-year-old Ahmed Aden Ali said Tuesday from his lawyer’s office in Winnipeg.Ali, along with members of his family, had been living in Minneapolis as government-sponsored UNHCR convention refugees since 1999. Most of his family members are still in the U.S.He had landed immigrant status but didn’t become a U.S. citizen — so he lost his status after being convicted of grand theft auto and other misdemeanours in 2010 and 2013.Ali served his time but was then sent to immigration detention. He was eventually released on a deportation order.After Donald Trump was elected president, and amidst a wave of immigration raids, Ali paid a driver $200 US for a ride to the border. He walked into Canada on April 8 and was picked up by RCMP.“I was fearing getting deported. I was thinking, coming over here, I could start over,” Ali said.However, Canada Border Services Agency officers determined Ali was not eligible to remain in Canada because of his criminal record.They detained him and said he was going to be deported.Ali admits he got mad at that point. He swore at the officers and deliberately set off the sprinkler system in the detention room, but insists he didn’t threaten or assault anyone.“I cussed them out. I said some bad stuff to her but I did not threaten,” he said.“How can I assault somebody? They had the door locked. I’m inside the cell, she’s outside. So you tell me, is there any way I can assault her?”After the incident, the CBSA said an officer was assaulted by a traveller resisting arrest.“The officer sustained minor injury but did not require further medication attention. Our officers have the training and tools to respond to these situations,” said a statement provided to CBC News.Ali was charged with two counts of uttering threats, mischief over $5,000 and assaulting a peace officer.He spent two weeks in Headingley Correctional Centre and the Winnipeg Remand Centre.Now out bail, on conditions including a curfew, he’s pleading for understanding.Haunted by the pastAli says he suffers from post-traumatic stress disorder and flashbacks from a violent incident in Somalia when he was 14. While Ali watched, a friend shot his own mother.“I should’ve grabbed it [the gun], but I didn’t do it because I thought he was joking. But he did do it,” Ali said. “It really affected me.“When you see too much death, some people, it’s like nothing to them. That’s what it was like over there in Somalia.”Ali takes medication for stress and anxiety. He’s also trying to kick an alcohol addiction and deal with the after-effects of a brain aneurysm he suffered in 2013.He’s on social assistance, living in a downtown Winnipeg shelter while he waits to apply for a work permit. He volunteers his time translating for other refugee claimants.“I’m not what everybody said I am. They think that I’m violent. I’m not violent. I’m just trying to change my life to come here and be successful in life,” Ali said.

Ali’s criminal charges are winding through the justice system.

He has an admissibility hearing in June, which will determine if he’s eligible to make a refugee claim.

If he’s ordered deported, his lawyer says he’ll try to keep him here by proving it’s too dangerous to send him back to Somalia, or arguing he should be allowed to stay on humanitarian and compassionate grounds.“I don’t believe the United States is a country he’s going to be able to be returned to,” David H. Davis said.“So I say to Mr. Ali the ball is in his court, meaning if he demonstrates good civil obedience, stays out of trouble, he continues his volunteer efforts and then eventually he’s going to be eligible for a work permit. As long as he demonstrates he’s here to comply with the rules and play by our rules, he has the opportunity to legitimize his status and never have to face that removal order.”‘Is it a deserved second chance?’But another immigration lawyer says he’s worried about the precedent — and reaction — this case could generate.“My background has always been giving people second chances but my question is, is it a deserved second chance?” asked Ken Zaifman.“He’s got family in the United States. He was a permanent resident of the the United States. His place where he should’ve resolved whatever issues he had and asked for a second chance is in the United States. If he’s unable to do that or the American system doesn’t allow him to do it, I don’t know if it’s Canada’s obligation to take him in.”

Cases like this only add fuel to the debate about asylum seekers, Zaifman added.

“How do we deal with people like this? How do we maintain the integrity of the system and also ensure that we’re not denigrating our obligation to real refugees?” he asked.

“It’s a balance. In my view, yes, it does raise a concern. It shows perhaps individuals who are coming to Canada to make refugee claims may not have the strongest claim and I don’t want that to affect real refugees. I don’t want that to affect the selection process, the determination process, and the appetite of the Canadian public to help refugees.”

After the alleged assault on the CBSA officer, the Customs and Immigration Union said members have concerns about the number of asylum seekers with criminal convictions being allowed into Canada.

The CBSA later said only three of 135 people were detained between March 20 and April 16 because they were a danger to public safety. It still has not provided data on how many of those who are not detained have criminal records.

Meanwhile, Ali’s lawyer said the border is being protected, and Canadians have no reason to be concerned.

“I don’t believe Canadians need to be fearful that there’s some onslaught of criminals leaving the United States and coming into Canada. I don’t think that’s the situation at all,” Davis said.

“Canada wants to make sure that whomever is seeking refuge here is going to do so in a peaceful manner and they want to become future taxpayers and I think that’s what Mr. Ali is trying to demonstrate right now.”