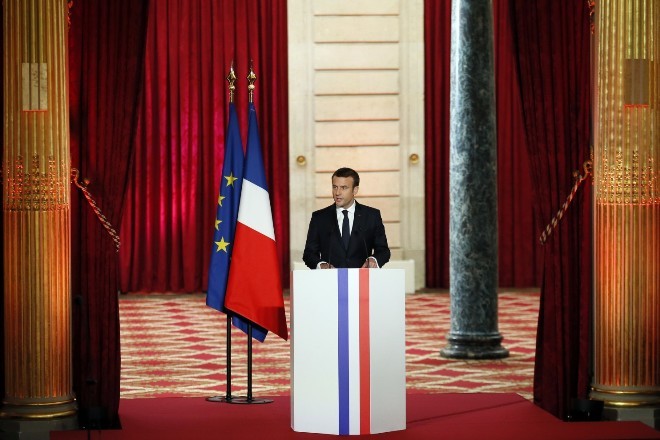 Emmanuel Macron was officially inaugurated as France’s president during a ceremony at the Elysee Palace on Sunday, thereby becoming the country’s youngest head of state since Napoleon.

The pro-Europe centrist leader has vowed to reform his country with a moribund economy and rebuild trust with the European Union.

Macron, who was a candidate of The La Republique en Marche (REM, Republic on the Move), had scored a decisive victory over the far-right candidate, Front National leader Marine le Pen, in the presidential run-off on May.7.

The 39-year-old is now the eighth president of the Fifth Republic, which was founded in 1958.

A former investment banker, Macron served as top adviser on economic issues to outgoing President Francois Hollande between 2012 and 2014. He then served as economy minister in Hollande’s Socialist government for two years. Macron founded En Marche!  (On the Move) in April last year.

At the ceremony, Macron walked up the red carpet to the palace steps and exchanged a ceremonial handshake with Hollande. The two then headed inside the president’s office, where they held a private meeting during which they discussed matters of state; Hollande reportedly also handed over the codes for France’s nuclear arsenal to the new head of state.

Hollande, who ended up being the most unpopular president in the country’s history, was the first sitting head of state to not seek re-election in the Fifth Republic.

Macron later walked Hollande to his car, who left amid applause from Elysee staff and associates.

Laurent Fabius, president of the Constitutional Council, had pronounced the official presidential election results and declared Macron as president at the ceremony.

Macron signed the minutes of investiture and received the insignia of the Legion of Honour, the highest decoration in France.

The new French president in his inaugural speech said he understood the responsibility entrusted to him by the French people. “It is an honor, and I understand its gravity,” he said.

He said France chose “hope and the spirit of conquest” in the presidential election.

“The world and Europe need France more than ever,” Macron said, pledging to “give back to the French their self-confidence”.

He promised that the EU would be reformed and relaunched.

He also paid tribute to previous French presidents and said he wished “to return France to its leading role on the world stage.

“It is up to us to build the world that our young people deserve. Together, we can write one of the most beautiful images of our history,” he added.

Following the speech, the new president walked to the terrace of the Palace to receive military honors and observe a 21-gun salute before having lunch.

The president will later lay a wreath at the Tomb of the Unknown Soldier at the Arc de Triumph and go to the City Hall of Paris to meet Mayor Anne Hidalgo and sign the parchment of the city.

The next challenge for the centrist leader’s movement is to win 290 seats in the legislative elections next month in order to secure a majority. The REM movement has revealed a list of 428 candidates, many of whom who have never held an elected office before.

The two-round legislative elections are scheduled to take place on June 11 and June 18 that will elect 577 members of the National Assembly, France’s lower and more powerful house of parliament.

Like outgoing Hollande in 2012, the pro-Europe centrist will meet German Chancellor Angela Merkel in Berlin on Monday during his first trip as president.

The visit aims at highlighting the importance of the relationship with Germany to relaunch the European project, according to Macron’s entourage. It is traditional for French leaders to make Berlin their first European trip.

The new president is also expected to name the country’s prime minister in the next few days.