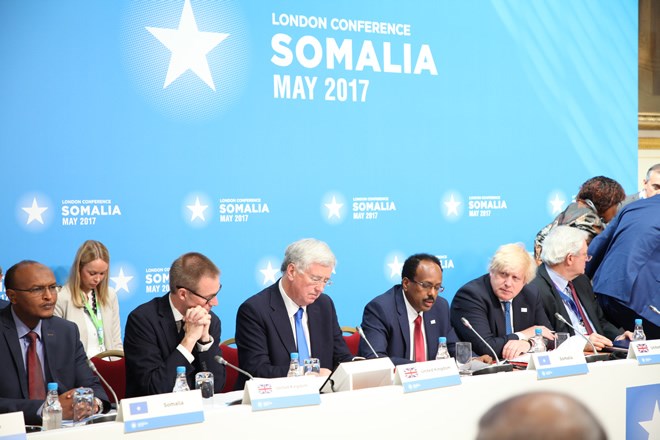 London (HOL) – Representatives from over 40 countries and organisations – including heads of states, vice-presidents, top-level government officials and organization directors – met at the Lancaster House in the St. James district of London on Thursday to renew their commitment to Somalia in the areas of humanitarian assistance, security reform and economic development.

UK Prime Minister Theresa May opened the one-day conference by thanking all of Somalia’s partners for this assistance and noting that Somalia has made immense progress since the first London Conference.

“As we meet today, Somalia has a critical window of opportunity. The election of President Farmajo and his mandate for reform provide a unique chance for Somalia to take control of its security and to build an inclusive political settlement.”

Theresa May pledged that Britain would provide an additional US$27 million (£21 million) to train Somalia’s security forces over the next two years.Arms EmbargoSomalia’s President Mohamed Abdullahi Farmajo stressed the need for an extensive security reform in Somalia to combat Al-Shabaab.He called on the United Nations and International Community to lift the arms embargo on Somalia so that Somali National Army soldiers can equip themselves to take back territory in control by Al-Shabaab, secure supply routes and stabilize the country.“For far too long, our security forces and terrorist groups have been fighting using the same type of light weapons—mostly AK47s. Despite the bravery of our men and women in uniform, we were locked in symmetrical battles with the terrorists.”“Time has come for Somalia to be able to get access to qualitatively better equipment and weapons than the terrorists,” he added.The arms embargo has been in place since January 1992 in response to the civil war that erupted in the country after the ouster of Siad Barre. In November 2016, the arms embargo was extended until November 15, 2017.At the post-event press conference, Farmajo said that he did not expect that the embargo is lifted immediately, but rather after Somalia demonstrates that it has met the necessary requirements.AMISOMKenyan President Uhuru Kenyatta said that reinforcing AMISOM is in Somalia’s best interest in the short term. He justified the troop surge by saying that it was necessary to take back territory still in Al-Shabaab hands.“This should include the upsurge of AMISOM by an additional 4,000 troops to liberate areas still under the control of terrorists. The international community should also facilitate the deployment of critical enablers and force multipliers.”“I, therefore, urge this conference to endorse the call by the troop-contributing countries and the African Union for urgent measures to support and strengthen AMISOM,” he said.Somalia plans to have a well-trained, disciplined national army of 20,000 to take over AMISOM by 2020.Kenya is one of African five countries that have contributed troops to 22,000 member African Union Mission in Somalia (AMISOM).Humanitarian SituationUN Secretary-General Antonio Guterres asked for increased humanitarian assistance in Somalia to avert the possibility of a famine.  The UN says it needs an additional $900 million this year, bringing the total budget for next year to $1.5 billion.“This morning we presented the revised humanitarian response plan seeking an additional $900 million to the end the year,” Guterres said in opening remarks at an international conference on Somalia hosted by British Prime Minister Theresa May.The drought in Somalia has created a humanitarian disaster as over half of the total population (6.2 million) is in need of food aid and just under half a million at risk of famine, the vast majority of which are children.As a result of poor access to drinking water, health officials are desperately trying to push back a cholera outbreak. Since the beginning of the year, the World Health Organisation (WHO) has confirmed over 36,000 cases, with the most infected area’s being Baidoa and its surrounding villages. Earlier this year, Somali President Mohamed Abdullahi Farmajo called the drought a “national disaster”.Despite a massive donor drive since the beginning of the year, aid experts say Somalia still faces an uphill battle and more aid is needed to thwart a full-blown famine.Debt ReliefSomalia’s economic recovery has been one of the four main points on the conference agenda. Somalia is looking for relief of it’s whooping $5.3 billion debt. The majority of the debt is interest that has been incurred since as far as the 1970’s.The World Bank, IMF, and the Africa Development Bank were all present at the conference and have pledged to work with Somalia going forward to fulfill the Economic Recovery Plan set out by the Somali government. A representative for the World Bank said that the comprehensive plan was among the most detailed that they have ever seen. Somalia, its partners, and international financial institutions agree that access to finances is imperative for Somalia to ensure economic growth in the future.Somalia has been at the heart of many conferences organized in its name and both the international community and Somalia realize that time is running out for Somalia.UN chief Antonio Guterres said, “Somali people will never forgive us if we miss this opportunity”. He added that “After more than 20 years of immense conflict and a tremendous impact on its neighbours, all the conditions have been met to make Somalia a success story. This is a Somali government we can trust. This is a plan we can trust.”Somali President Farmajo understands the tremendous pressure placed on his young cabinet to deliver, but he said that the world is behind Somalia, and he intends to “seize the opportunity” on this historic day.As he reiterated many times throughout the day, “the expectations are very high, but not performing is not an option”.