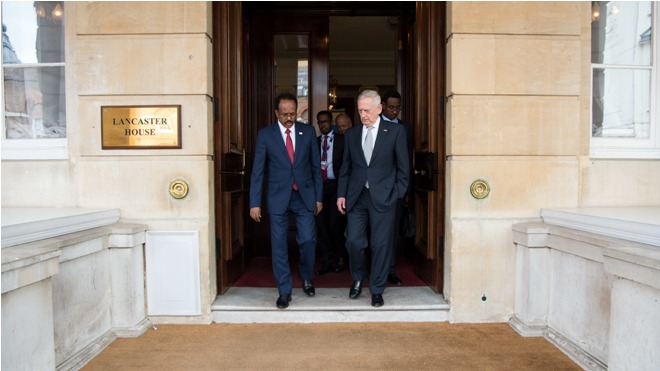 “That’s a decision we’ll take if it’s broached to us, and we’ll decide yes or no,” Mattis told reporters after attending a London security conference focused on the Somali government’s relentless struggle with the extremist group al-Shabaab.

No such request has been made by the Somali government and it was not discussed in London, Mattis said. But his openness to entertaining such a possibility highlights the Pentagon’s evolving perspective on how aggressively it should support indigenous forces willing to fight mutual adversaries.

U.S. military officials won’t say precisely how many troops are in Somalia now, though the number is believed to be a few hundred at most.
The Pentagon’s strategy there, as with other regions where a lack of governance has allowed terror groups to take root, centers on training and advising — or “working by, with and through our allies,” as officials now routinely characterize it. That includes dozens of soldiers from the Army’s 101st Airborne Division who arrived in early April to help the Somali army improve its logistical capabilities.

That strategy also entails direct counter-terror assistance, a more-dangerous mission led by elite special operations forces. On May 5 it resulted in the first American combat death in Somalia since the early 1990s.

Navy SEAL Kyle Milliken, 38, was killed and two other U.S. commandos were wounded during a clash with al-Shabaab fighters about 40 miles west of the capital, Mogadishu. U.S. officials have offered few details about the incident, though it appears the intended targets included at least some of the group’s leadership as well as a radio station used to broadcast propaganda.

“The way we have had the most involvement to date,” Mattis said Thursday, “has been the support, both equipment and training support of [African peacekeeping] forces. … That’s intel sharing, training, obviously strikes if the conditions are met, that sort of thing. That’s where we’ve been and you’ll see that continue.”

He characterized the peacekeepers’ role as “buying time” for the Somali government to assemble its security forces. Much of that effort is concentrated in neighboring Djibouti, where the U.S. routinely conducts military training for a host of partner nations battling extremists throughout the region.

“We’ll probably also do the continued equipping of the Somali army as they stand it up,” he said. “In other words, not just to the [African peacekeeping] force, but continue to provide the basic kit that light infantry needs to go into the field.

“I honestly don’t know how what the specifics are,” he added. “I know we’re going to provide a kit to them.”