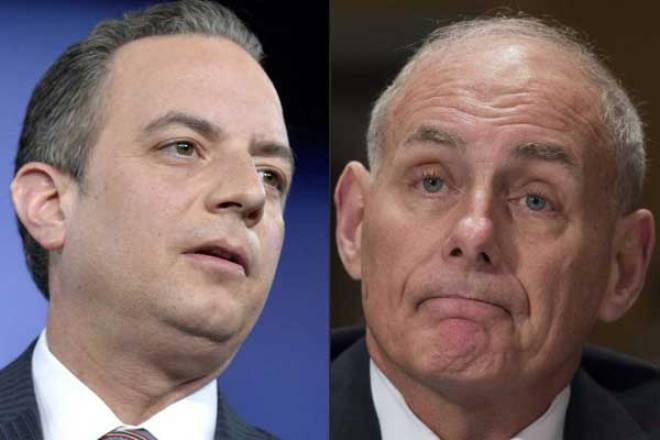 Only hours after a humiliating defeat on health care reform had underlined his tenuous control over his party in Congress, Trump announced a second shakeup of his inner circle in barely a week.

Priebus has been under fire for months, seeing one White House ally after another resign or leave, culminating in the departure of press secretary Sean Spicer a week ago.

His exit appeared inevitable when Trump did not intervene as his new communications director Anthony Scaramucci publicly described Priebus as a “paranoid schizophrenic” in a foul-mouthed tirade that also saw him savage another top Trump aide.

Trump announced the switch on Twitter as he landed in Washington after a day trip, on which he was accompanied by both Priebus and Scaramucci.

“I am pleased to inform you that I have just named General/Secretary John F Kelly as White House Chief of Staff,” Trump tweeted.

“He is a Great American… and a Great Leader. John has also done a spectacular job at Homeland Security. He has been a true star of my Administration.”

As the tweet began to reverberate around Washington, Priebus exited Air Force One into the pouring rain and loaded into a black suburban with senior White House aides Steven Miller and Dan Scavino.

Moments later, Miller and Scavino got out and entered another van. Priebus’s vehicle then left the presidential motorcade.

Priebus later said he resigned on Thursday, but referring to his departure admitted that he and Trump “talked all the time about this subject.”

Kelly will be sworn in to his new post Monday.

His Department of Homeland Security is responsible for enforcing border security and has taken a tough line on immigrants inside the United States.

The move likely signals a greater focus on law and order issues and will put further strain on relations between Trump and the Republican establishment.

Both Priebus and Spicer were part of the Republican National Committee, and the bridge that linked the party to Trump.

“I think we’ve still got a good relationship, we’re going to continue working with the party,” said Sanders, trying to discount notions of a rift.

The party rebellion — led by Senators Susan Collins, Lisa Murkowski and John McCain — is a deeply ominous sign for Trump, whose political brand is defined by his dealmaking acumen and a take-no-prisoners approach to politics.

There are growing signs that Trump’s threats against skeptical Republicans are losing potency, when Republicans not only killed efforts to dismantle Obamacare, but joined Democrats in supporting a new sanctions regime against Russia.

Trump now faces a choice between swallowing a Bill he deeply opposed and refusing to do so — a move that would intensify suspicions about his attitude to Russia and likely bring a humiliating veto override.

The grim news from Congress came as an outburst from Scaramucci highlighted divisions within the Trump administration.

In an eye-watering exchange with a New Yorker reporter published late Thursday, Scaramucci described Priebus as a “paranoid schizophrenic” and chief White House strategist Steve Bannon as trying to build his own brand off Trump.

Scaramucci, a millionaire New York financier who is going through a divorce, arrived at the White House vowing to serve Trump’s interest and right a badly faltering administration.

He did not apologize for the tirade, but said he would try to clean up his language in the future.

“I sometimes use colorful language. I will refrain in this arena but not give up the passionate fight for @realDonaldTrump’s agenda,” he tweeted.