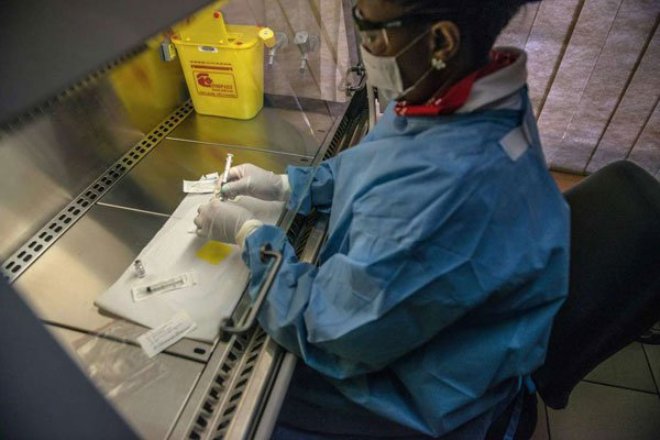 A person holds an experimental vaccine against the AIDS virus in Shoshaguve, near Pretoria, on November 30, 2016 as South Africa launched a major clinical trial of the experimental vaccine, which scientists hope could be the “final nail in the coffin” for the disease. PHOTO | MUJAHID SAFODIEN | AFP

A revolution in HIV could see the daily oral pills replaced with injectable drug given six times a year, scientists have revealed.

The injection which is supposed to slowly and continuously release HIV medication into the blood of the patient is on Phase II trial.

The medication is expected to reduce pill burden and providing convenience for people living with HIV once approved.

Many people struggle to swallow the drugs daily and in many cases resulted to a comeback and resistance.

The results were presented on Tuesday at the International Aids Society Conference on HIV Science in Paris, France.

“As research into new medicines for HIV progresses, adherence to therapy continues to be essential to achieving viral suppression and reducing the emergence of resistance mutations,” Dr David Margolis, a researcher from ViiV Healthcare, said.

“The primary end point evaluated antiviral activity and safety through 32 weeks of maintenance treatment and the study will continue up to 104 weeks of treatment,” said Dr Margolis.

Side effects – including diarrhoea and headache – were similar in all groups,” he said.

“ This study results was important since we now have data showing the durability and tolerability of long acting viral suppression for a two drug regime out of 96 weeks,” said Dr John Pottage, Chief scientist at ViiV health care and co-author of the study.

Another study has concluded that introduction of antibodies in infected people may delay the rebound of the HIV load in the body especially after interruption from antiretroviral therapy.

The study known as RV397 sought to find treatments that could suppress the viral loads without the need for lifelong ART.

Scientists randomly trialed the effect of VRCO1 antibodies in a controlled demonstration to determine the viral changes in people infected with HIV and who have been on ARTs respond.

VRCO1 is a broadly neutralising antibody that inhibits multiple strains of HIV.

“This is the first time that the VRCO1 antibody has been evaluated in people who started anti-HIV drugs during acute HIV infection,” said Dr Trevor Crowell, the research physician who presented the study.