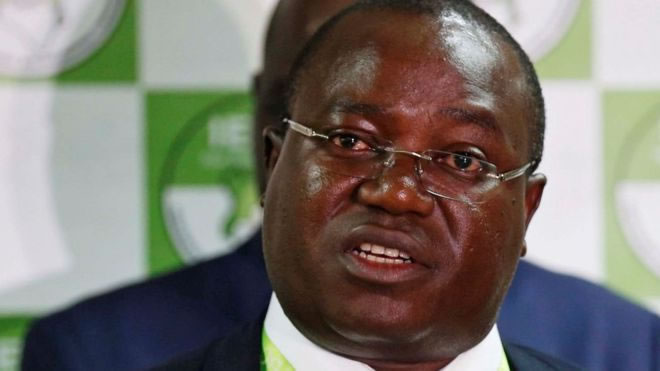 The man in charge of Kenya’s computerised voting system has been found dead just days before the 8 August elections.

Chris Msando, an electoral commission IT manager, had gone missing on Friday.

“There was no doubt he was tortured and murdered,” said IEBC chairperson Wafula Chebukati.

Tension is high as the presidential election is expected to be a close race between incumbent Uhuru Kenyatta and long-time opponent Raila Odinga.

Police said on Monday that the bodies of Mr Msando and an unidentified woman had been found in the Kikuyu area on the outskirts of Nairobi and taken to the city mortuary.

“The only question in our mind is who [killed him] and why he was killed a few days to elections,” Mr Chebukati said.

Kenyan newspaper The Star reports that Mr Msando’s body was found with one arm missing.

Today was supposed to big a day for Chris Msando – he was to oversee the public testing of the voting system which has been vaunted by the Independent Electoral and Boundaries Commission (IEBC) as key to eliminate vote rigging and to deliver a credible election.

The Kenya Integrated Electoral Management System (KIEMS) will be used to identify voters and transmit results.

A similar electronic system that was used in the 2013 election failed spectacularly, leading to manual counting of votes which some have argued allowed for voter manipulation.

Mr Msando had only been on the job for two months, having taken over after his predecessor was suspended for refusing to cooperate with an audit firm which was cleaning the voters’ register.

His death will do little to assuage growing concerns about the IEBC’s election preparedness and questions about its credibility.

On Twitter, his name and #RIPMsando are trending, with many expressing shock and disgust at what to them looks like a targeted elimination.

This news also comes at a time when the government has denied allegations by opposition parties that it is planning to deploy the military to swing the election to its favour.

With only a week to the election, this is no doubt another testing time for Kenya and it can only emerge from this tense moment by holding credible elections and arresting and prosecuting Mr Msando’s killers.

Some fear there could be violent clashes between rival supporters after the result is announced, with the losers refusing to accept defeat.

However, few expect the type of violence which killed more than 1,200 people in ethnic, post-election violence 10 years ago.

Following the clashes, the International Criminal Court charged President Kenyatta and his deputy with instigating violence, but the charges have since been dropped due to a lack of evidence.

The government has denied ICC accusations that its witnesses had been intimidated to prevent them from testifying.