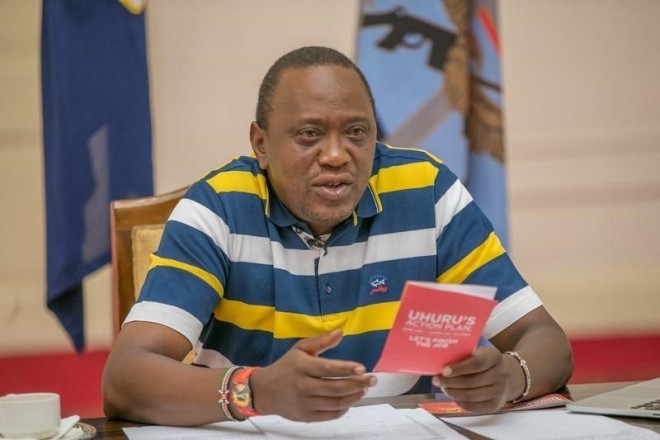 NAIROBI (Reuters) – Kenyan opposition presidential candidate Raila Odinga on Monday fielded questions alone on stage after his rival, President Uhuru Kenyatta, failed to show up for a debate between the two.

Odinga, who is the flagbearer for the National Super Alliance coalition, said his top priorities if elected in the Aug. 8 general election would be to lower food prices and rent and tackle youth unemployment.

“First is the issue of putting food on the table, reducing the cost of living for the people. This is our priority number one. We address the issues of flour, so that we can lower the prices of maize flour, sugar,” he said.

He said to lower rent he would enforce the existing rent restrictions act. “This law is meant to protect the poor from exploitation by the landlords,” Odinga said.

The office of Kenyatta, who is running for a second and final five-year term in office, gave no explanation for his absence.

On Sunday, he answered questions online and pledged to create 6.5 million jobs in the next five years if elected, adding that his administration would continue to invest in infrastructure, education and training, small businesses and a high-tech economy, a statement from his office said.

Kenyans are also due to choose on Aug. 8 legislators and local representatives for the first time since 2013, when the elections passed peacefully after the opposition challenged the results in court.

The presidential television debate is the second ever held in the country after a similar one in 2013.

A separate debate was held earlier in the evening among three other candidates and three more who did not show up.

The debate organizers said the earlier debate was for candidates who polled 5 percent or less in two national opinion polls.

According to polling firm IPSOS, Kenyatta and Odinga are likely to take about 90 percent of the vote, while none of the six independent presidential candidates is polling above 1 percent.

Opinion polls show the gap between Odinga and Kenyatta has closed.

Kenyatta’s Jubilee Party has also promised to provide free, quality primary healthcare for all Kenyans; free secondary education; affordable housing and connect every citizen to the electricity grid by 2020.