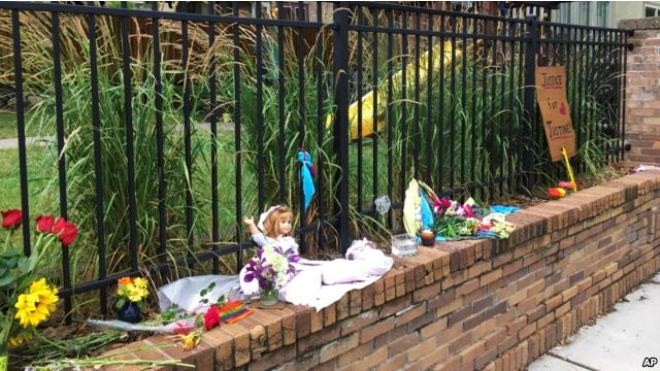 Items are placed at a makeshift memorial, the scene where a police officer fatally shot Justine Damond, of Sydney, Australia, July 18, 2017, in Minneapolis.

The personnel records for a Minneapolis police officer who fatally shot an Australian woman were released Monday, providing some detail about the training courses the officer took but no insight into his performance on the job.

The records show Officer Mohamed Noor was hired as a cadet in March 2015. In September of that year, he received a letter saying he passed his Peace Officer Licensing Examination and was eligible to become a licensed, sworn officer.

The records also show Noor took multiple training courses, including recent in-service training about active shooter situations during the Super Bowl, which will be held in Minneapolis next year. His file also says he passed all of his annual semi-automatic, handgun and shotgun qualifications, but there are no additional details about how he performed.

Noor is on paid leave after he killed Justine Damond, a 40-year-old spiritual teacher who was engaged to be married, on July 15 after she called 911 twice to report a possible rape.

Noor, who was in the passenger seat of a squad car, shot across his partner in the driver’s seat and hit Damond. His partner told authorities that he was startled by a loud noise shortly before Damond appeared at the police vehicle.

Noor was one of several Somali-Americans hired by the department in recent years as part of the city’s public effort to diversify so it better reflects the city.

Questions about police training were raised after details about the shooting were released. Last week, then-police Chief Janee Harteau criticized Noor’s actions but defended his training, saying: “This officer completed that training very well. He was very suited to be on the street.”

Harteau resigned Friday at the request of the mayor.

Minnesota is the only state that requires police officers to have at least a two-year degree, though many departments prefer four-year degrees. People who want to be officers either earn law enforcement degrees, or, if they have four-year degrees in other subjects like Noor, they can complete a certificate program.

Noor got a degree in economics and business administration before applying to become a police officer.

The records released Monday don’t list any awards or commendations for Noor. Records previously released show he had three complaints against him, including one that was dismissed with no discipline and two that are pending.

The records also show that Noor got a raise in September and is earning more than $28 an hour.