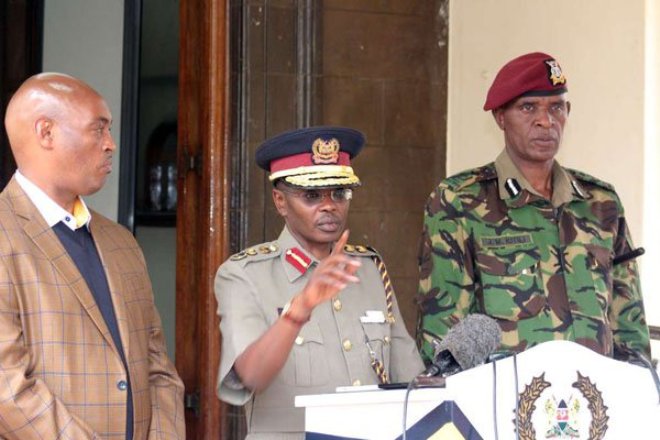 Inspector General of Police Joseph Boinnet addresses a press conference in Nairobi on July 30, 2017 regarding the attack on DP Ruto’s home. Police have assured voters that there will be peace during elections. PHOTO | DENNIS ONSONGO | NATION MEDIA GROUP

Security agencies have been placed on high alert during this electioneering period following credible intelligence that Al-Shabaab is planning to carry out attacks in seven counties bordering Somalia.

According to security agencies, the group is plotting attacks in Mandera, Wajir, Garissa, Lamu, Tana River, Kilifi and Mombasa counties.

Multiple sources within Anti-Terrorism Police Unit and National Intelligence Service confirmed the plot including presence of members of Al-Shaaab intelligence group, Amniyat, on a mission to carry out the attacks in the seven counties with the objective of causing fear among Kenyans to stop them from taking part in the elections.

The sources said the objective ranges from carrying out minor and major attacks and kidnappings of senior security and government officials with a view of causing panic and confusion among voters.

“They are keenly following political happenings in the country. Al-Shabaab sees Kenya’s highly polarised elections as a fertile ground for mayhem,” a security analyst warned.

Inspector General of Police Joseph Boinnet and Police Spokesman George Kinoti did not comment on the report.

However, a senior police officer confirmed on condition of anonymity that there are imminent terror attacks, adding that many have been successfully foiled since mid-June.

“We have directed our officers to remain on high alert across the country because the threats are serious.

“The objective is to cause panic as we head to elections but we want everyone to be vigilant and come out to shame them,” the source privy to the terror alert said.

The report comes in the wake of two latest propaganda videos released Thursday and Saturday by Shabaab on the elections in the country.