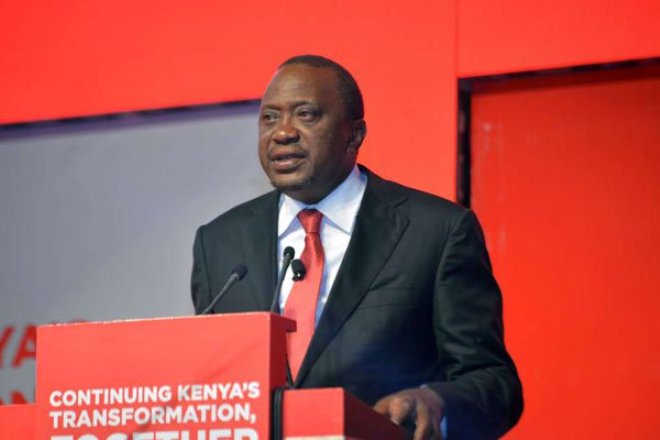 President Uhuru Kenyatta speaks at a past Jubilee Party function. The Head of State on Sunday said he will concede defeat if he loses fairly. PHOTO | FILE | NATION MEDIA GROUP

President Uhuru Kenyatta on Sunday evening admitted that he will concede if he loses fairly.

During a TV live chat, the Head of State also asked his opponents to do the same so as to maintain peace in the country.

“I’m the man who abides by the wish of the people and I pray that my opponents do the same. I ask Kenyans to look at one another as brother and sister,” he said.

He said the Jubilee government wants to produce the calmest election that has ever been seen in the country which is why security forces as being equipped to ensure they handle any situation that might arise.

“We are putting in place measures and our security team is working to ensure the safest and most peaceful elections held in this country,” he said.

The conversation with Kenyans, which was aired on K24 TV and also on Facebook Live Chat, comes barely a week after the Head of State snubbed the last presidential debate which was organised by various media houses.

The president was also asked how Jubilee government has tackled the issue of food security, what they are doing about youth unemployment, the integration of the East African Community, marginalised regions and the terrorism threat among other things.

On regions that have for long stayed marginalised, Mr Kenyatta noted that his government, in the past four years, has done more than any other previous administration by digging boreholes, constructing roads and putting such areas and Northern Kenya on the national electricity grid.

“We don’t want a situation where anyone coming from places like Moyale says they are going to ‘Kenya” just because they feel excluded,” he said.

He however, said that in as much as the Jubilee government has not delivered the stadia they promised in their 2013 campaign, some have been launched and are under construction.

But he also blamed the county governments of Kisumu and Mombasa for having issues, which he said, have delayed progress in constructing the sports facilities.

He noted that his government wants to make the EAC work and has, for instance, reduced the number of days used to transport cargo from the Port of Mombasa to Uganda.

“We want to ensure our people in the EAC do business or live anywhere in the region and my government is committed to this,” he said.

Asked why his children have not been seen campaigning for him the President said: “I don’t want them involved in the campaigns unless they do so desire. All I aspire is to create a Kenya where not just them, but any other child out there can do whatever they want.”