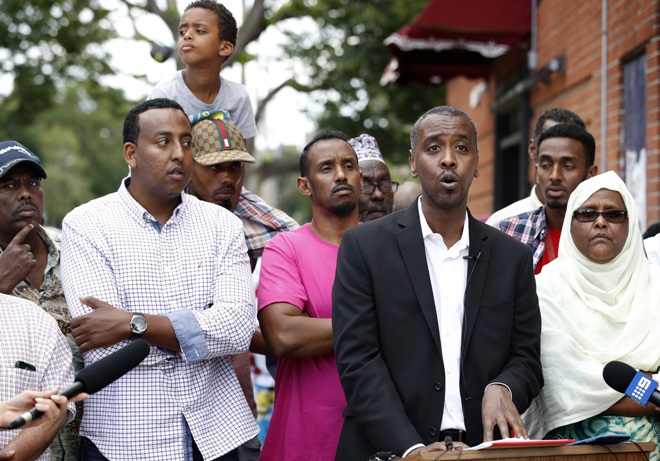 Warsame was surrounded by at least two dozen members of the Somali community as he held a news conference outside the Darul Quba Cultural Center in south Minneapolis, which he described as “the heart of the East African community.”

He lambasted media reports and “fake news peddlers on Facebook” who called Noor “Somali killer cop,” and said former U.S. Rep. Michele Bachmann was “talking trash” when she insinuated in a speech last week that Noor may have shot Damond for “cultural” reasons.

“What we’re seeing is a lot of rhetoric in the media where this is a Somali issue, where this person is a Somali officer,” Warsame said. “That’s very dangerous, because you’re seeing an action of an individual, a member of the Police Department, being given to the whole community. That’s unacceptable.

Damond, 40, was killed late on July 15. She called 911 at 11:27 p.m. to report a possible sexual assault taking place behind her home in the 5000 block of Washburn Avenue S. in the Fulton neighborhood. Eight minutes later, when officers hadn’t arrived yet, she called again.

Officers Matthew Harrity and Noor arrived in their squad. Damond approached them and Noor shot across Harrity, hitting Damond in the abdomen with a bullet. She died at the scene.

She was to be married to her fiancé, Don Damond, in August. Warsame said he sends his condolences to Damond’s family.

He said he’s never met Noor, hasn’t spoken to him and wasn’t at his swearing-in ceremony when he joined the police department two years ago.

Warsame was asked whether Noor or other East African police officers have received death threats since the shooting.

He’s worked with Acting Chief Medaria Arradondo, whom he said has a great deal of experience.

“But what I’m looking for is fundamental change, because we keep seeing these things again and again,” he said. “We need a police chief who’s going to be that change.”

Warsame would not comment on calls from some community activists for Mayor Betsy Hodges to resign.