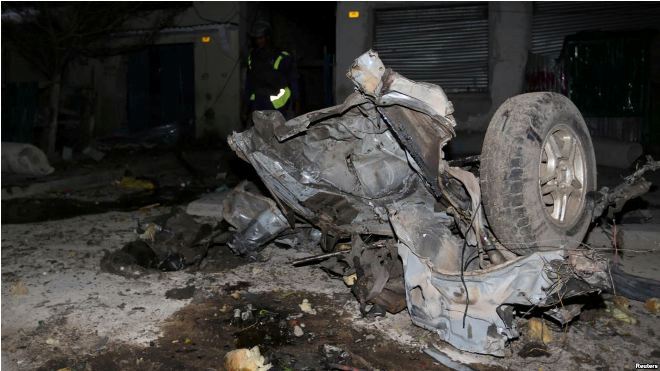 WASHINGTON — Al-Shabab militants have shot dead a provincial governor and his brother in the Somali capital, Mogadishu.

Mohamed Ali Elmi, the governor of Galgadud region in central Somalia, and his brother were gunned down in Mogadishu’s Yaaqshid neighborhood Friday night, witnesses said.

The governor was visiting relatives when gunmen who trailed him opened fire. Witnesses said the gunmen fled before security forces arrived.

“Our mujahedeen unit carried [out] an operation to kill the governor,” al-Shabab said in a statement posted on a website affiliated with the group.

The incident occurred less than three hours after a car packed with explosives blew up in the center of the capital, killing at least three civilians.
Al-Shabab retakes town

“I can confirm to you that the anti-peace element, the enemy of Somalia, has taken over the town without a fight, and that AMISOM troops have withdrawn,” he said.

Leego is 30 kilometers west of Ballidogle airport, where U.S. advisers and instructors have been training several hundred elite Somali commandos.

Najah said he was disappointed that AU troops left town without informing his administration.

“I have contacted AMISOM on why they had to suddenly withdraw from an area so strategic,” Najah said.

AMISOM has yet to comment on the Leego withdrawal.

Al-Shabab’s capture of Leego effectively cuts off Mogadishu from these regions, making air travel the only means to get there.

Najah said he wants either government troops or other AMISOM troops to retake Leego from al-Shabab.

The withdrawal came five days after al-Shabab carried out one of the deadliest ambushes on Ugandan troops. The attack on a supply convoy in Golweyn village July 30 killed as many as 23 Ugandan soldiers, according to Somali government officials. Uganda said it lost 12 soldiers.

Military sources told VOA Somali that the troops who were pulled from Leego Friday would be deployed at Golweyn village to secure the southern route linking Mogadishu to the port town of Barawe.

Al-Shabab, which is allied with al-Qaida, has been fighting since 2006 to overthrow the Somali government and turn the country into a strict Islamic state.