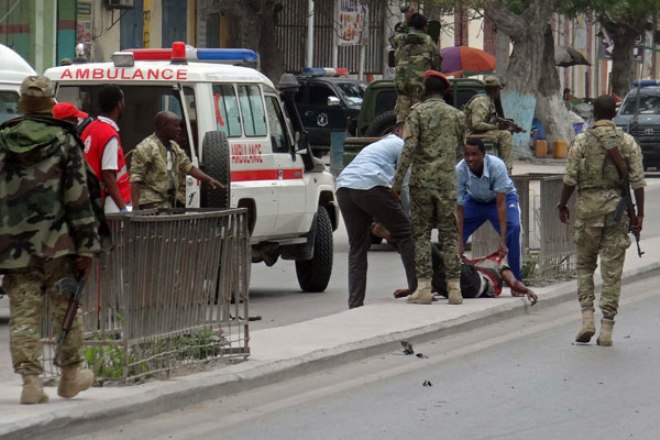 Civilans and soldiers help one of the injured people after the Sunday attack. File photo

Kampala- The army spokesperson, Brig Richard Karemire, has said lack of armoured vehicles is exposing Ugandan troops to the enemy attacks especially ambushes on the main supply routes that connect Mogadishu to the UPDF forward bases.

According to military sources in Mogadishu, the 12 UPDF soldiers killed on Sunday by al-Shabaab were not moving in the infantry fighting vehicles which had been the usual practice because they had broken down. Brig Karemire blamed the breakdown of the fighting vehicles to long routes.

“We need more infantry fighting vehicles so that our troops don’t travel when they are bare. But also, our UN partners should come in to airlift logistics to the bases,” he said.

The UN provides logistical support to all the troop contributing countries in Somalia including paying for wear and tear of military equipment, according to the Memorandum of Understanding signed between the UN and Amison in 2009.

The killed soldiers were ambushed at Goryowein along Bulu-maler and Beladamin in Lower Shabelle region, about 140km Southwest of the capital Mogadishu as they patrolled to secure Mogadishu-Barawe road which is the main supply route to the UPDF forward bases.
This road, according to Brig Karemire, is not safe because of al-Shabaab ambushes.

“That road is not safe. We need force multipliers. We also need jammers to deflect Improvised Explosive Devices [IEDs] that target our troops,” he said.

These armoured vehicles break down because most roads in Somalia are impassable with potholes as no repairs have ever been made since 1992 because of the civil war.

According to military sources, the worn out military equipment is also becoming a concern in Mogadishu city because they cause accidents due poor mechanical conditions.

The Sunday attack on UPDF was the deadliest in two years with 12 deaths and seven injuries.

In September 2015, al-Shabaab attacked the UPDF base in Janaale, Southwest of Mogadishu, killing 19 soldiers and one Pte Masasa was taken as a Prisoner of War until he was executed early this year.

After that attack, the army leadership reorganised UPDF formations in the forward operating bases and made them bigger to avoid being outnumbered by the enemy.

The reorganisation came after the inquiry set up by former Chief of Defence Forces, Gen Katumba Wamala found that the Janaale UPDF defensive position, manned by 100 UPDF troops, was overwhelmed by the al-Shabaab attackers who were estimated to be between 350 and 500 in number.

Brig Karemire said yesterday that the Sunday attack was not about outnumbering UPDF soldiers but a surprise attack.

“It was not an issue of being out numbered. It was a surprise attack,” he said.

Meanwhile, Parliament on Tuesday demanded a comprehensive report on the incident. MPs also observed a moment of silence to honour the soldiers killed.

Deputy Speaker Jacob Oulanyah said it is the duty of government to account for all the dead soldiers.

Lwemiyaga MP Theodore Ssekikubo said Parliament being the mandated institution to deploy the army outside Uganda, it should receive updates regarding the attack.

“Since we have government and is fully represented in the House, it only deserves that as a country and as Parliament sitting here to deliberate on behalf of our people, we be given a statement on what happened,” said Mr Ssekibubo.

In a brief response, Defence and Veterans Affairs Minister Adolf Mwesige said the army has already contacted the bereaved families.

He added that their bodies will be brought back home today at 1pm.

“The plane carrying the caskets of the deceased will touch down at Entebbe UPDAF base on Wednesday Aug 2, at 1.30pm and will be received by the Deputy CDF Lt Gen Wilson Mbadi and other UPDF and Ministry of Defence officials,” the army statement issued read in part.
Opposition chief whip Ibrahim Ssemujju Nganda called for a review of the UPDF presence in the war torn horn of Africa.

“If you can ask government to give us a comprehensive report not only on our soldiers that have been killed in Somalia but also on our engagement in the conflict in Somalia,” said Mr Ssemujju, who called for a complete withdrawal of the UPDF from Somalia.