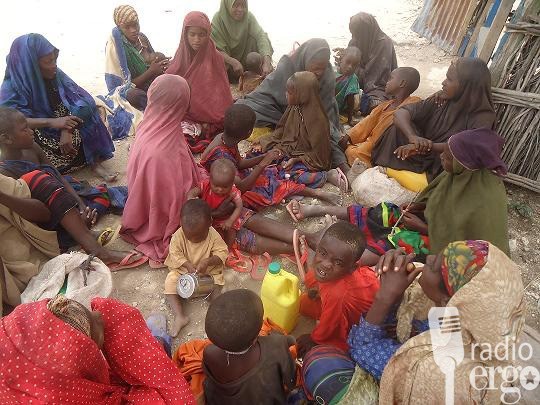 Single mother Hawo Osman Abdi and her nine children have been sleeping outside under a tree for several days and night since running away from their home in Aad, in central Somalia’s Galmudug state, after conflict erupted between local people and Al-Shabab fighters.

Hawo told Radio Ergo’s local reporter that they fled for fear of their lives, without picking up any of their belongings from their house, as the fighting erupted.

The left on Sunday 1 July at around two o’clock in the morning as the noise and commotion of conflict spread around them.

They reached the town of Amara to the north in the afternoon of Tuesday 3 July.

“We trekked for three days and two nights, there was no one who even managed to carry shoes. We have all got cuts and blisters on our feet. We abandoned everything we had, we didn’t eat, we are barely alive,” said Hawo, still highly stressed from the recent events.

Hawo, her children, and her elderly father walked together. They only got water along the way. She said they stopped occasionally to eat some plant leaves so they did not starve.

They ended up in Amara with only the clothes they are wearing. The children have to sleep on the bare ground.

They scattered and fled to Amara, Hobyo, El-hur, and Ba’adweyne.

Nur Salah Hussien has been appointed by the Amara administration to organize relief aid for the people displaced by the armed conflict. Nur told Radio Ergo they have been collecting money and food from residents in the town to give to the displaced families, who are mainly pastoralists and business people.

Hawo said she was given six kg of flour and rice from the Amara administration.

Some families have been moved to a school in Amara, which is closed for the holidays until 5 August. Nesteho Elimi and her eight children are camping at the school, after walking from Wable, 26 km from Amara, and spending a day and night on the road.

Nesteho said they have been eating just one meal provided by relatives. She turned to her relatives after the little food they had been given by the administration ran out.

Other families fleeing the conflict have moved to the rural areas or are lodging with relatives.