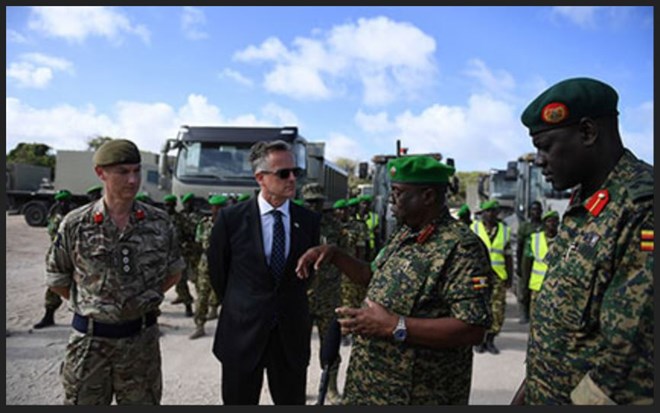 The United Kingdom has come to the rescue of African Union Mission in Somalia (Amisom), donating 49 pieces of heavy equipment worth $7.4 million to help in clearing the main supply routes in the war-torn country.

The machinery will also be deployed in the mission enabling unit, which is based in Mogadishu.

While handing over the equipment, the United Kingdom ambassador to Somalia, David Concar, said his government is committed to supporting Amisom in its efforts to stabilise Somalia.

“What we are doing today, transferring 5.6 millions pounds worth of equipment is, we hope, going to make a difference to the ability of Amisom to clear roads and supply routes and to press ahead with stabilising Somalia,” said Mr Concar.
The mission, which is implementing the transition plan to hand over the full security mandate to local security agencies, however, remains starved of equipment to deploy in airborne combat.

The Force Commander said the equipment will come in handy as the 21,000 strong Amisom force tries to push Al Shabaab from the key areas that the Somali terrorist group still occupies.

“Amisom doesn’t have air assets and it’s one of the biggest challenges for the mission,” said a source who spoke to The EastAfrican off the record.

Moreover, even for the recently donated ground-based non-combat equipment, the Ethiopian, Djiboutian and a multinational force of Amisom did not receive any, despite operating in areas like Jubbaland, which officials and intelligence reports reveal has the biggest Al Shabaab presence.

Despite being over run by Al Shabaab, it is not clear why the multinational force deployed in parts of Jubbaland — and indeed the Ethiopian and Djiboutian contingents — did not receive any equipment to enable them to clear supply routes.

But sources at the mission said that the donations by different countries that support the mission are made to all sector commanders dependent on their needs as assessed by the commanders.

Due to bad roads and floods cutting off some supply routes, delivery of reinforcement troops and supplies to these areas often attracts attacks by ambush and improvised explosive devices mounted by Al Shabaab.

In May, the Commander of the Ugandan contingent Brig Gen Paul Lokech told journalists in Mogadishu that the mission was keen to overcome this challenge, and was exploring water and air transport as options to deliver supplies to distant bases.

But the reality is that Amisom remains starved of air assets both for combat and delivery of troops and supplies.

The United Nations-backed peacekeeping force uses equipment — ammunition and other military hardware — that is owned by each of the contingents, and replaced by the UN when it is destroyed on mission.

But this is not always straightforward; Uganda, for instance, burnt its fingers in 2012 when three of its four helicopters crashed on Mount Kenya enroute to Somalia as force multipliers to support the mission. They have never been replaced.

Uganda contingent commander Brig Gen Lokech received 14 of the machines donated by the UK and pledged to use the equipment to make the transition process a success.

“We know with this equipment, we can improve our operations capability and it will also help us, jointly with the Somalis to meet the requirement of phase one of our transition,” Brig Lokech said.

The Kenyan and Burundian contingents of Amisom received 12 machines each, while the Mogadishu-based mission enabling unit got 11.

At the beginning of last month, the UK government — which supports Amisom in training in logistics, medical and heavy engineering capabilities, among other things —also donated 30 night vision goggles and 600 protective glasses to the peacekeeping force, to support night activities on the front line.

Last year, the UN Security Council approved the gradual reduction of Amisom troops and transfer of security responsibilities to the Somali National Army and other security forces.

Amisom landed the first boots on Somali land in 2007, and the force currently controls over 80 per cent of the country, but still faces a resilient from the fighters.