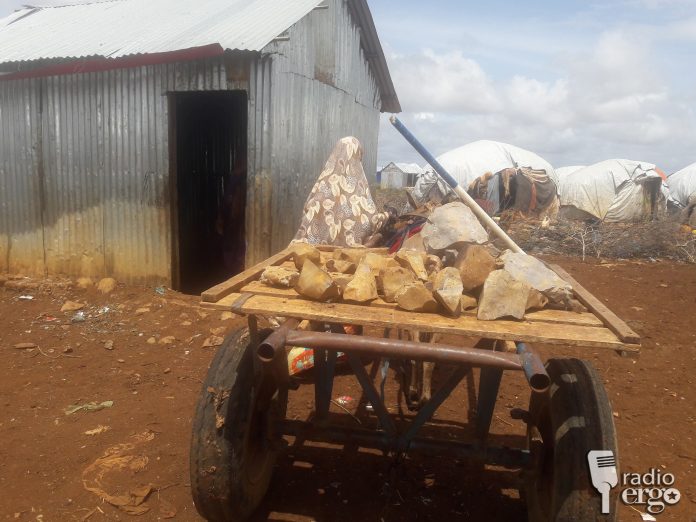 (ERGO) – More than 200 farming families displaced by river floods have been given land and money to build new homes in Bulo-gadud village, in southern Somalia’s ​Lower Juba region

Madina Muse Ali, one of the people helped by the resettlement programme, lived for more than seven months with her nine children in a tiny grass thatched hut, offered as a temporary shelter by a local family.

“We now live in our own home so we are no longer a burden on others. We are independent and we very much appreciate the help. It is like a breath of fresh air. I’ve built a room, a kitchen and a hut outside to provide shade for the children,” Madina told Radio Ergo.

Madina’s family were displaced by floods from their four-hectare farm in Bula-kusow, west of Bulo-gudud. She was given $145 to buy building materials and is also getting $80 monthly cash to supplement the 50,000 Somali shillings she makes doing laundry jobs.

She hopes to save part of the cash to establish a small business.

“I plan to trade in tomatoes and pumpkins. I want to put up a small stall outside my house and sell fresh produce that I would get on credit from farmers,” she said. “I’d make a small profit to cover my children’s needs.”

There are around 320 displaced farming families in Bulo-gadud, which is 30 kilometres from Kismayo. The village administrator, Mahad Matan Bule, said many were staying with relatives or living in makeshift shelters outside. The most vulnerable 200 families have already been selected, while the remaining families are to be resettled early next year.

The scheme, implemented by the Norwegian Refugee Council (NRC) with funding from the Swedish government, provides each family with a minimum one-room house on a small plot of land provided by the Jubbaland state government.

Ibrahim Adan and his family of six are now living in a three-room house he built using wood and plastic roofing material purchased with the grant he received. He was thankful to leave the hut they had been staying in.

“I was a displaced person living on someone’s land, but now I’m a landowner living in my own home,” he said.

The family fled their six-hectare farm in Laan-abaar in May. He told Radio Ergo that recurrent floods and losses have left him considering giving up farming. However, he is now working alternate days at a nearby farm owned by a local man to earn some income.

The deputy head of Jubbaland Refugees and IDPs Agency, Mohamed Sheikh Khadar, told Radio Ergo that the resettled families would be given the title deeds for their plots early next year.

“The families are in a much better situation now, we are witness to that fact, and anyone who wants to provide them with more support has a good foundation to build on. It’s indeed a big step forward,” he said.