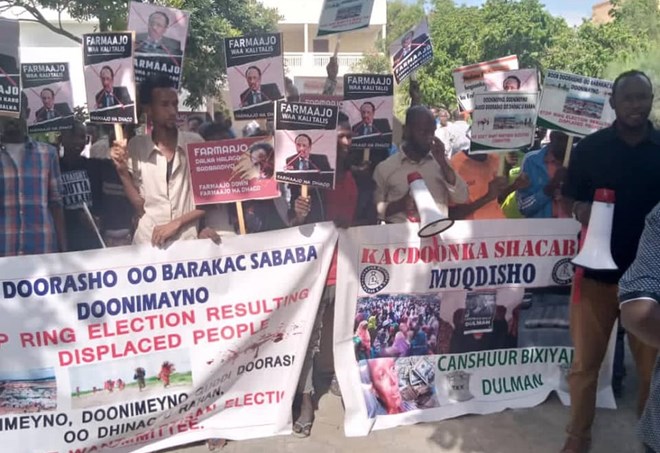 MOGADISHU (HMC) – Scores of people have been injured and deaths feared in ongoing protests in Mogadishu following a clash between protestors and security forces.

Pictures from the various scenes showed people suspected to have been hit by bullets being carried with some bleeding. Among the areas where casualties have been reported are Yaqshid districts where placards carrying demonstrators poured on various roads from day break.

The protestors are waving placards claiming that President Mohamed Farmaajo was planning to rig the upcoming elections. Some accused the president of causing more human displacements as a result of attempts to ‘rig’ the elections.

Following the protests backed by opposition groups, police and soldiers were deployed in various rods across the city where they put-up barriers to block the protestors who are moving towards the city centre.

The protests come amid heightened political tension in the city ahead of elections. Opposition groups have demanded the president dissolves the interim elections committee and name a new one terming it compromised.

On the regional front, Farmaajo went on another offensive Monday night declaring end of relations with Kenya over what his administration termed as ‘blatant interference’