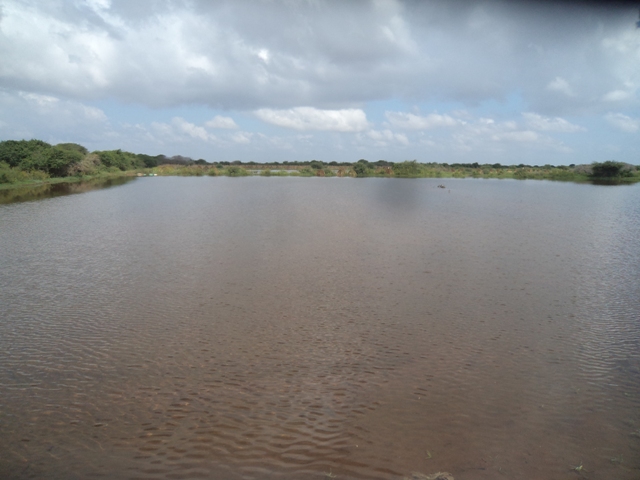 (ERGO) – Ibrahim Hassanow, 36, is on the verge of quitting farming after floods twice wiped out all the crops he planted on his small plot in southern Somalia’s Balad district, in Middle Shabelle region, within the space of four months this year.

It is an emotional moment for Ibrahim, who grew up in the refugee camps in Dadaab in neighbouring Kenya, and opted to return home to rebuild the family’s life and traditional livelihood by tilling the soil.

“I owe about two million shillings,” Ibrahim told Radio Ergo. “The farm needed five hours of ploughing and the tractor hire cost 350,000 Somali shillings for every hour. We are just here now in the floods and we don’t know what to do.”

Ibrahim’s 1.5 hectares of sesame, maize and beans in Beerweyn-eli  village were washed away by river flooding on 15 August.  A friend bailed him out by giving him some seeds as a loan, but again in November everything he planted was wiped out by further flooding.

He is stranded without means to rejoin his wife and three children, whom he left behind in Iftin IDP camp in Mogadishu’s Kahda district, hoping they would join him when the farm succeeded.

“I want to go home to my family but I don’t have the means or the money to join my children.  The family needs my support and I worry about them a lot,” he said.

Having lived for 30 years in Ifo camp in Dadaab, Ibrahim speaks English and has health worker training. The family returned to Somalia on 27 March 2018 under the UN’s voluntary repatriation scheme. When the repatriation grant they were given of $500 ran out, they had to leave their rented house in Eelasha Biyaha and move to the IDP camp.

But Ibrahim is not the only one to have seen his investment washed away before his eyes.

According to the Balad district head of social affairs, Mohamed Abdullahi Ahmed, the floods in November were caused by the overflow of a dam in Jameo that destroyed more than 2,000 hectares of farmland, and displaced thousands of families in 49 villages, across a 50 kilometre area.

Hassan Ali Mire, a father of 26 children with an eight hectare farm in Mukay-dheere village, lost all his maize, pumpkins and tomatoes. The floods also washed away the 20 barrels of maize he had stored, a tractor-trailer, and a small car.

His family has moved to a hill not far from the village, where hundreds of other families are also stranded.

“We are now living in a small hilly area, living like animals! Right now there is nothing we can do and the water is flowing in all directions. There is no way of even thinking of our second move. We have nothing with us except the clothes we are wearing,” Hassan told Radio Ergo.

The district authority said the flood waters contained snakes and other harmful creatures, making it difficult to get children and women out of the affected areas.  A boat would take five hours to navigate around the wide area of the flooding caused by the breached dam.

Balad district head of social affairs, Mohamed Abdullahi Ahmed, thanked the local people for the support they had provided and asked aid agencies to help the affected families.

People have been resorting to using boats to cross the flooded areas, especially as the road linking Balad to Jowhar, the capital city of Hirshabelle state, is also blocked. In November, five children under the age of 11 drowned when two boats were involved in an accident