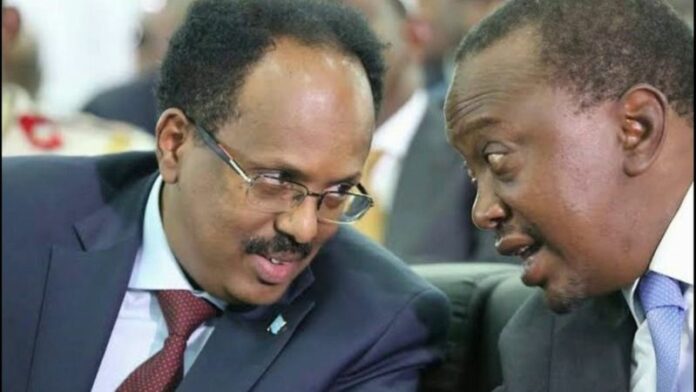 Somalia President Mohamed Farmaajo wants to slap Kenya with more stringent diplomatic restrictions if Nairobi continues with what he terms political interference in the February elections.

A source close to President Farmaajo said at least 100,000 Kenyans working in various sectors of Somalia’s economy risk losing their jobs if Kenya is cited as an enemy.

“President Farmaajo will soon declare Kenya an enemy and that means more than 100,000 people could lose their jobs directly. Kenya’s Ministry of Foreign Affairs and the government should find a solution to avert this crisis,” said the source.

Nairobi has accused Somalia of double standards by banning flights from Kenya citing Covid-19, yet Ethiopia’s miraa exports are allowed in Somalia.

The ban on miraa exports is hurting the livelihoods of thousands of Kenyan farmers.

On Monday, Farmaajo’a administration issued a notice directing that any Kenyan wishing to travel to Somalia must first apply for a visa at the Somalia Embassy in Nairobi.

Although they cited Covid-19 restrictions, sources said Farmaajo’s administration is not happy with the “political interference” and that Kenya has been in bed with Jubaland’s leader Ahmed Madobe, who is considered “a traitor.”

Last week, Somalia expelled Kenya’s ambassador and recalled its own envoy from Nairobi after accusing Kenya of interfering in the electoral process in Jubaland, one of Somalia’s five semi-autonomous states.

Although Somalia did not reveal details of the interference, Kenya has denied any involvement and dismissed the allegations.

“As a result of the Kenyan government’s political interferences in the internal affairs of Somalia, the regional President of Jubaland has reneged on the election agreement that was reached on the September 17, 2020 in Mogadishu,” Somalia’s Foreign Ministry had said.

Jubaland is a southern state that borders Kenya and includes the major port of Kismayo.

In August, Farmaajo’s regime demanded that Kenya “must treat Somalia as an equal, desist from interfering in Somalia’s internal affairs, apologise for violating Somalia airspace, allow in goods from Somalia, including fish, rice, sugar, honey, meat and milk and stop forcing flights from Somalia to make a stop-over in Wajir for inspection”.

Somalia also demanded a government-to-government talks after it snubbed a delegation of traders and officials from Kenya crops regulator — Agriculture and Food Authority (AFA).

In February 2017, miraa traders suspended exports to Somalia after the country introduced punitive taxes. Somalia increased the tax on the produce from Sh309 to Sh360.5 per kilo, leading to a four-day boycott by Kenyan miraa exporters.

The decision was rescinded and the tax dropped to Sh247 after intervention by the Kenyan government.

Miraa farmers have urged the government to intervene and have cargo planes resume flights to Mogadishu, so as to revive their venture.