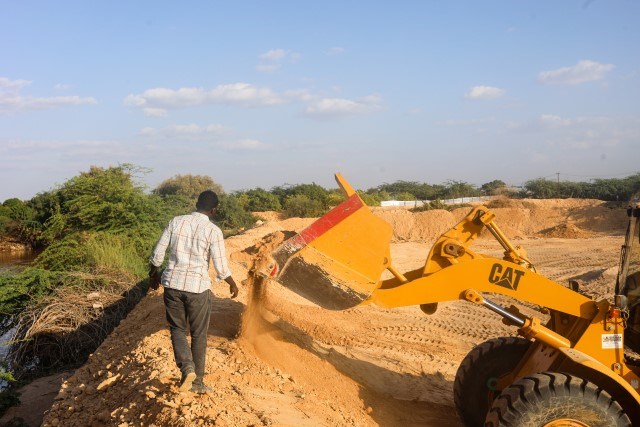 Somalia, like many countries, is affected by frequent climate-related hazards such as floods, droughts and tropical storms. Flood frequency has increased in Somalia over the past 20 years, resulting in the disruption of people’s livelihoods and the economy at large.

Climate change – compounded with other factors such as low ability to adapt, a rapidly growing population, poor infrastructure, weak river embankments and poor soil structures – is exacerbating the level of flood damage inflicted on local communities.

The Food and Agriculture Organization of the United Nations (FAO), through the Somalia Water and Land Information Management (SWALIM) project, has developed a robust Early Warning System (EWS) that enables the production and dissemination of early warning information to response agencies, the Somali government and vulnerable communities.

The EWS is supported by a dedicated network of climate observers and a number of river gauging stations along the Juba and Shabelle rivers, which are prone to flooding. The EWS also includes an SMS alert system, called Digniin (from a Somali word meaning “warning”), where designated observers across Somalia can report flood-related incidences to supplement traditional early warning mechanisms.

The messages and information received from these observers is verified and relayed, if relevant, as a warning to vulnerable communities in near real-time via mobile devices. Further, before the beginning of each rainy season, SWALIM monitors the status of river breakages along the two rivers using high-resolution satellite imagery. The information is then shared with intervening agencies and development partners to support early action by closing the open riverbanks – a major cause of floods along the rivers. For example, two open river points in Jowhar district have led to massive flooding since 4 May 2021 despite relatively low river levels in the area.

A successful observing system with satellites

Since November 2015, SWALIM teams have mapped and shared information on riverbank breakages annually, often augmented by ground verification surveys when logistics allow. Information collected through the satellite imagery analysis is used together with data collected from eight river monitoring stations along the Juba and Shabelle rivers to better inform relevant government and development partners and to provide early warning information for early action.

The use of remote sensing techniques to acquire information without physical contact has become incredibly useful for countries like Somalia. “Given the limited security in large parts of Somalia in the last 30 years, field surveys are often not feasible and consequently data can exclusively be obtained through remote sensing,” said Michele Bolognesi, Geospatial Information Technical Advisor, FAO in Somalia.

The data collected remotely via satellite also informs and supports emergency response efforts. For example, SWALIM is using satellite imagery in near-real-time to detect areas at risk of flooding and subsequent associated risks to support response agencies in planning and allocating resources. To ensure that the area at risk of flooding is thoroughly mapped, radar images are used with satellite-derived information such as cropland and populated areas, which enables estimations of the areas and populations likely to be affected. “The timely information from SWALIM has been crucial to all stakeholders to plan and implement flood risk mitigation programmes early on,” said Ugo Leonardi, SWALIM Technical Advisor. “This has helped to save lives and livelihoods from potential shocks,” he said.

FAO also developed a flood-monitoring tool equipped with a mobile application system that allows data collectors in the field to collect and report flood-related information. This is conducted using a geo-tagging function, which uses an electronic tag to assign a geographical location to an image. The app shares geo-tagged pictures of the flooded area with a brief description of the situation. Data is then relayed to the server and is automatically visualized on a flood-mapping portal in real-time. These geo-tagged pictures and reported flooded locations serve to confirm flooding information extracted from the satellite imagery.

The effectiveness of disaster management largely depends on effective and timely dissemination of relevant information. To achieve this, SWALIM has developed web-based information sharing platforms where information on disasters such as floods and droughts may be rapidly shared with government partners and humanitarian agencies at the FAO SWALIM website.