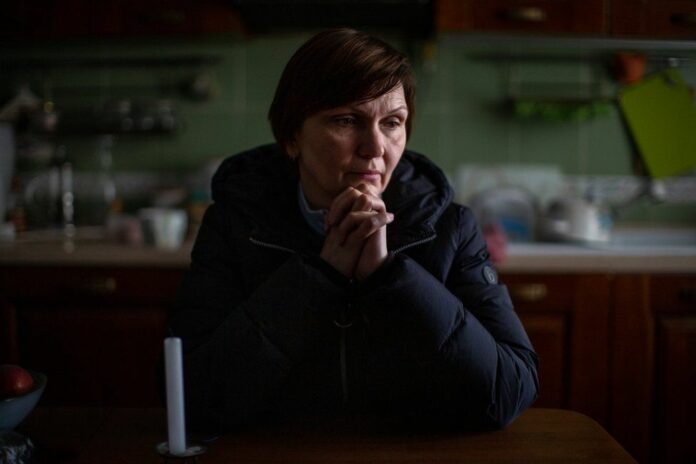 Vira Kryvoshenko kneeled on the ground by her front door and pressed her hands together in a prayer: please do not take my son.

It was only blind bad luck that Valeriy had arrived at the same time as the “evil spirits”, as she called them. He was in the town of Makhariv, delivering food and medicine to her and her neighbours – older people who could not, or would not, flee the Russians.

Vira looked up. The Russian soldiers were a few feet away, spray painting “V” symbols on her car, to avoid friendly fire when they drove it away. One of them – just a boy, Vira thought, my grandson’s age – took out a walkie-talkie.

Vira raised herself up on her cane and spoke her prayer aloud. “Please do not take my son.” In fact, Valeriy Kuksa was her son-in-law, but she called him her son. The Russians were taking her son. The young one raised his gun halfway. “Go back inside grandma,” he said. “He is just going to help us push the car out of the driveway.”

But they pushed him into the driver’s seat of her car and pointed a gun at him, Vira said. She willed Valeriy to look back at her, but he looked straight ahead and drove away from the house and out of her life.

Stop in any village in the region west of Kyiv, where the Russian army terrorised the civilian population for a month, and you will hear a story about someone who vanished. A brother who went to take petrol to a friend and never arrived. A father who left his house on an errand and didn’t return. A son who drove away at gunpoint and didn’t look back.

Before the invasion, Maria Sayenko saw her father Mykola all the time – he lived a few houses over in the village of Hurivshchyna and came nearly every day to see her new baby. Then one day early in the Russian occupation he disappeared. “He left home and never came back,” Maria said. “And nobody saw him anywhere.”

A neighbour said he thought Mykola had gone to the next village on an errand, but he couldn’t remember for sure. His house was just as he might have left it to walk to the shops. Maria filed a police report via an automated service online and settled in to wait. All Maria knows is that her father Mykola Medvid, a 56-year-old part-time car mechanic, left his house on 18 or 19 of March and hasn’t been to see her baby since.

“We went to the nearby villages and the ones further away,” Maria said. “He wasn’t at a friend’s house, at a checkpoint. Not dead, not alive. It’s like he disappeared into thin air.”

A few miles down the highway, in the village of Shpytky, Yulia Zhylko sat in her car in her driveway staring at a family photograph of her brother Yakiv on her phone. They were as close as siblings got, she said, and just a year and two weeks apart in age – 36 and 37 now and still living together with their parents.

On 11 March, Yakiv’s friend in the village called to say he needed petrol. “My brother is so kind. He said, ‘I’m going to take him fuel and I’ll be right back’,” Yulia said. Not everyone in Yulia’s situation spoke about their loved one in the present tense, but she never wavered. And yet, Ukrainian soldiers had found Yakiv’s car, on the shoulder of the highway, riddled with bullet holes. By the time Yulia was able to go to the car, after the Russians were gone, it had been burned through. But there were no signs of a body.

“We have called everywhere, filed every report,” Yulia said. “They took all the information – shoe size, eye colour, blood type, scars, everything.”

Yakiv had no tattoos, something their mother had taken pride in, but was therefore classed as “no distinctive marks on skin”. Yulia filed the police report and joined the long list of people waiting for news.

In Makhariv, Valeriy Kuksa’s family was waiting anxiously for news. There was still no power in the town, and Vira sat in the dark, next to the fire, with her daughter Olena and grandson Danyl. They had filed a missing report with the local police, but Olena was full of worry that it might not have been registered properly, that there was something they hadn’t done right to find her husband. She wanted to get to the town of Bucha, the centre of the region, to ask the police in person, but there were bullet holes in her car windshield.

Nervously Olena went around the house searching for recent photographs of Valeriy. She didn’t know where the physical copies were. The house was dark and there were bullet holes in the walls and broken glass on the floors. A mortar shell had come through the roof and two others had detonated in the garden, spraying shrapnel through the house. All Olena could find was some passport pictures. She put them into a folder with Valeriy’s passport and got a lift to Bucha.

At the police office, the missing reports were still coming in, at least 10 a day. Relatives of someone missing fill out a standard police crime report. Every night, the reports are driven by police to a town an hour south, and processed and uploaded into a database. The team there also collects photographs of the dead from the local morgues and posts them on a public channel on the messaging app Telegram, with a brief description of the body.

In Bucha, the police reassured Olena that the report from their counterparts in Makhariv was in the general system, and told her Valeriy was not on the list of the identified dead. But there were at least 200 unidentified bodies in Bucha, they said, and he could be among them. They also told her to look at the Telegram channel of the pictures from morgues, but it didn’t prepare her for what she saw when she did.

As the car made its way back to Makhariv, Olena sat quietly scrolling through the gruesome images. Then she began to cry. “My soul aches, not just for my husband, for all these people,” she said. After a while, she tried not to look at the photographs and only scan the text for anything that could match Valeriy. Eventually she gave up. “That’s as much as I can take for now,” she said.

She looked out the window as the car approached her home. All along the road, storks stood in nests atop the telegraph poles – a sign in Ukrainian folklore that good families occupied the homes below. But the houses were pockmarked by bullet holes or completely destroyed by shells, and the families had been visited by terrible suffering and loss.

Olena had heard the stories about people taken to Belarus, to Russia; of civilians being returned in prisoner exchanges in the south of Ukraine. Everyone missing someone seemed to have heard these stories. She had wanted to travel to Kyiv to speak to the deputy prime minister, Iryna Vereshchuk, whose office is handling the exchanges, but the police in Bucha told her not to. All the information about Valeriy was in the right place, they said, she just had to wait.

Then, three days later, on Thursday last week, Olena’s phone rang, and the woman said she was calling from Iryna Vereshchuk’s office. She asked if she was speaking to Valeriy Kuksa’s wife, and Olena felt her heart stop in her chest. “Yes, you are,” she said.

The woman told her Valeriy had been identified alive among the hostages in Russia. Where he was, or when Olena might see him again, the woman could not say. But he was alive. “It’s OK,” Olena said, through her tears. “He will come back to us. I can wait.”