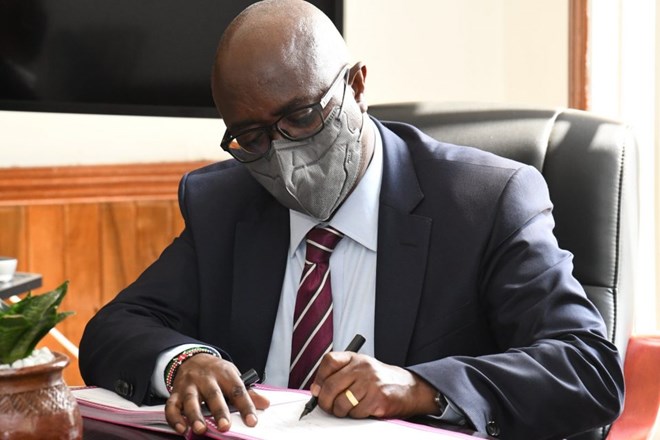 Kinoti,a miraa fan said the move to finalise talks and signing of a deal which is set to take place in the next two weeks will see resumption of the trade between the two countries hence boost the farmers’ buying power and have a ripple effect in the entire Mt Kenya East region.

“We want to thank President Uhuru Kenyatta for the diplomatic negotiations he has been carrying out quietly. The ban had greatly affected the economy of Mt Kenya East and the farmers’ earnings.The head of state means well for his people and I’m sure our farmers who had abandoned the crop will resume watering them. The only bit remaining is paperwork and trade will return to normal like before.” he said.

President Kenyatta was among Head of States who attended the inauguration of the new Somalia President on Thursday.

Kenya’s Agriculture Secretary Peter Munya who accompanied the President said Mr Kenyatta brokered the deal with new President Hassan Sheikh Mohamud on Thursday that will see the lifting of a two-year ban.

“I want to underline the importance of the Somalia market because it was the most lucrative and served as the launching pad for cargo transit to the Horn of Africa, Middle East and other countries.Farmajo was involved in the import of miraa from elsewhere, thus sidelining Kenya and this breakthrough is a relief to this country especially Miraa farmers” noted Munya

The ban led to a loss of a daily market for more than 50 tons of Miraa valued at more than sh 20 million then.

Following the deal, Munya asked Miraa traders to now prepare their product, following the reopening of the market.

“We are taking the good news to our farmers to now prepare because the market will be open in two weeks,” he said.

According to the Ministry of Finance, in 2021, the import of Miraa contributed sh 1.3 billion in tax to the country’s revenue.

CS Munya also revealed that in the agreement, once the trade officially resumes, the Miraa cargo to Somalia will be using the Isiolo Airport to Mogadishu because it is the shortest route.