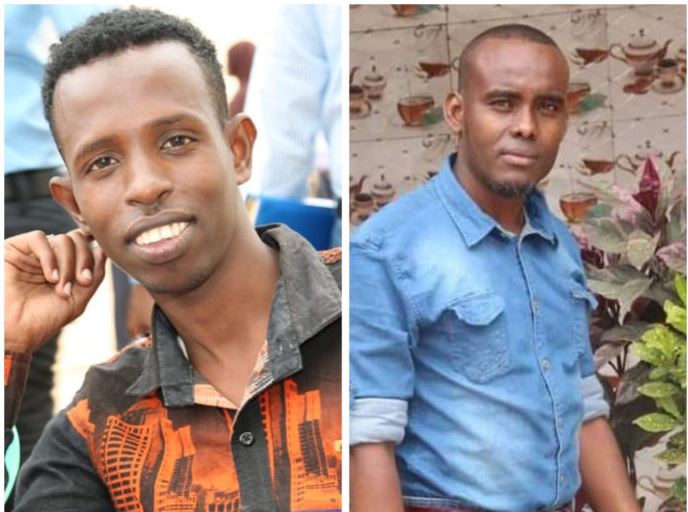 On Thursday, Baidoa police summoned and then arbitrarily detained Radio Warsan reporter, Mohamed Abdirahman Abdulle known as Malele and producer Farah Hussein Haji known as Weerow. Police initially stated that they were investigating suspected scammers when they summoned the pair. However, there are no charges brought against them until today as they are held at the criminal investigation department making their detention illegal.  We therefore call for their immediate freedom.

We are concerned that the two radio journalists were held in the same cell where alleged al-Shabaab suspects are held, according to representatives from our organizations who visited the jailed journalists on Sunday. While both Malele and Weerow were not notified of any wrongdoing, Baidoa police still continue to hold them in custody in violation to Article 35 of the Provisional Constitution which prohibits detention without charge for more than 48 hours.

The detention of the Radio Warsan journalists comes as South West State authorities scaled up their crackdown on independent media and journalists critical to them. On 15 July, South West State intelligence officers detained human rights journalist, Hassan Ali Daud, who reports for Arlaadi Media Network (AMN) and held him incommunicado for 19 days in Baidoa for covering a complaint by members of South West State opposition lawmakers who criticized president Abdiaziz Hassan Laftagareen following an alleged physical assault on the lawmakers. He was freed on 2 August without charge.

On 6 July, Baidoa police officers detained RTN television reporter, Mohamed Abdirahin Mohamed, from Baidoa city centre following his interview with an opposition member of the South West State Assembly, who among six other lawmakers, protested against the revocation of their immunity and membership in the state assembly. He was also freed a day later without charge.

Radio Warsan is one of the oldest trusted news outlets in South West State and its journalists have endured unbearable threats from various fronts including threats from state security forces. Baidoa police should immediately free Mohamed Abdirahman Abdulle (known as Malele) and producer Farah Hussein Haji (known as Weerow) without any further delay.