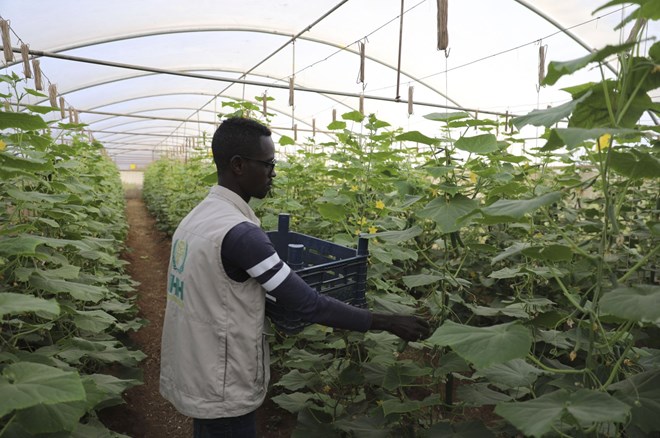 A state-run agency cooperating with a charity to reach out to the people of Somalia has managed to help locals earn a living through agriculture, with greenhouses proliferating in the African country over the past decade

The School of Agriculture project jointly organized by the Turkish Cooperation and Coordination Agency (TIKA) and the Istanbul-based charity Humanitarian Aid Foundation (IHH), has revived agricultural activities in Somalia. The project, conceived as a simple school in 2012, has evolved into the Somalia Anatolian Faculty of Agriculture and is currently serving as a university run by the Somalian charity ZamZam.

So far, more than 2,000 students have graduated from the school located in the capital Mogadishu. Graduates have pioneered the establishment of new greenhouses across the country, which had none before the school opened. Today, nearly 200 greenhouses serve the needs of Somalians.

The school also recently launched an education program for chicken breeding, by raising Atak-S, a breed commonly produced in Türkiye. In the greenhouses, vegetables flourish thanks to seeds brought in from the Mediterranean Turkish province Antalya, a greenhouse hub. Farmers are experimenting with new vegetables, including cucumbers, peppers, tomatoes and eggplant, seeking to spread their cultivation in the country.

Apart from greenhouse techniques, students learn how to use agricultural equipment and the best irrigation methods at the school, while the school’s newly established Seed Research Institute focuses on the production of seeds suitable for Somalia’s climate.

Othman Abdurrashed Hussein, a graduate of the school, now serves as a lecturer there. Hussein, who pursued postgraduate studies in Türkiye, spoke about the progress of the school. “There were not any greenhouses in Somalia when the school was opened. Somalians started opening greenhouses when they saw what we are doing here,” he told Anadolu Agency (AA) on Wednesday. He said all graduates of the school have benefited from scholarships during their studies, and they also invited farmers to benefit from classes.

Hussein said their experiments with Turkish seeds showed all are compatible with the soil in the country. He added that Afgooye, a southwestern town known for fertile land, is now housing hundreds of greenhouses. “Greenhouses are important because rivers have dried up, and the precipitation is insufficient,” he said.

More than 900,000 people in Somalia, mostly living in rural areas, have moved to internally displaced person camps since January 2021 due to the drought and lack of livelihood support.

According to UNICEF, more than 500 children have died in Somalia since January due to drought-related malnutrition. More than 7 million Somalis have been affected by the drought, according to the U.N.

The U.N. Food and Agriculture Organization’s (FAO) office in Somalia said earlier this month that it urgently required $131.4 million to assist 882,000 people across the Horn of Africa country. “Funding levels remain low across sectors,” the U.N. agency said in a statement, adding that its famine prevention efforts covering 55 of Somalia’s 90 districts were only 46% funded. Voicing concern about the drought situation in Somalia, it underlined the vulnerability of the households that have been affected by it. “We cannot wait for famine to be declared; we must act now to safeguard livelihoods and lives,” FAO said.

With agriculture accounting for up to 60% of Somalia’s national income, 80% of its employment and 90% of its exports, it is vital that efforts related to the sector are seen as part of a front-line humanitarian response.

Hasan Mohamoud Hasan, who heads a chicken breeding department at the university, said they started the breeding program with 1,200 chickens shipped from the Turkish capital Ankara. Currently, they produce up to 800 eggs daily. “Temperatures here affect the egg production, but our Atak-S chickens easily adapted to their new environment,” Hasan said, adding that people seeking to set up chicken breeding businesses in the country first visited them for training. “We hope to eliminate dependence abroad in egg production,” he added.

Operating in the African country since 2011, TIKA seeks to erase the image of foreign aid agencies left in Somalia. The agency’s top official in the country says its concept of developmental projects is based on a win-win model between the country where it operates and the country it represents. The group said it differs from a Western-style supercilious development model. “We define our work as a development cooperation model rather than a development aid concept,” TIKA coordinator in Somalia, Ilhami Turus, told AA in a recent interview.

TIKA has implemented different projects in Somalia from agriculture to health, from infrastructure and education to capacity-building development. TIKA also carries out humanitarian aid and social and cultural projects in Somalia. Under the coordination of the Turkish Embassy, it helped thousands of people affected by climate shocks such as the drought.

Turkish humanitarian aid organizations and development agencies like TIKA, the Turkish Red Crescent (Kızılay) and others started conducting development and humanitarian aid activities throughout Somalia after a devastating drought hit the nation. The Turkish Armed Forces (TSK) have established a training base in Somalia and are sharing their experience and knowledge derived from Turkish military insights with Somali soldiers to support their fight against terrorism. Elsewhere, the Mogadishu Recep Tayyip Erdoğan Training and Research Hospital carries out health services and successful surgeries and continues to train health personnel and employ workers at the facility.